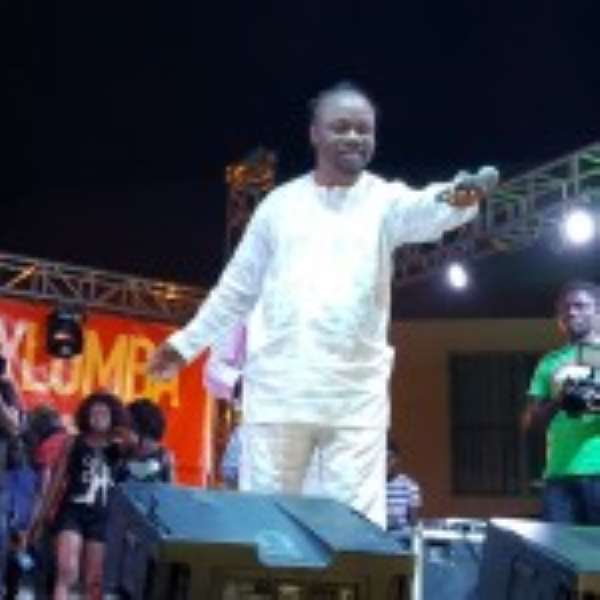 HIGHLIFE LEGEND, Charles Kwadwo Fosu aka Daddy Lumba, without doubt, produced one of his best live-stage performances in his entire music career on New Year's Day, in Kumasi.

The award-winning highlife music maestro proved to Ghanaians that he is still fresh and can deliver when called upon to perform at any event.

The music icon put up a mind-blowing stage performance at the Miklin Hotel in Kumasi for hours which incensed the huge audience to sing and dance all night long.

The merrymaking event was graced by top personalities, including DCOP Kofi Boakye, Kwame Sefa Kayi, Boris B and media gurus like Omanhene Yaw Adu Boakye, Loving Cee, among others.

The event was kick-started with musicians such as Kofi Nti, Nerox and Shatta Rako, just to mention a few, in turns, putting up brilliant shows to entertain the colossal crowd.

The entire foundation of the venue was nearly turned upside down when Daddy Lumba, who was splendidly dressed in all-white apparel, mounted the stage in the company of the Member of Parliament (MP) for Bantama, Kwabena Kokofu.

The music star, whose demeanour clearly showed that he was in good spirit, sang some of his melodious hit tracks, including the famous 'Yentie Obiaa', drawing the crowd to the dancing floor.

At the show, every music lover was simply in tune with Lumba's household songs.

He mesmerized music fans with his mid-tempo songs and dance moves, proving that indeed he is a force to reckon with in the music industry, as they demanded more of Daddy's splendid shows.

Lumba indeed was a blast. His stage performance was all that was needed to make a statement about the event.

At the tail end of the show, he thanked Ghanaians for their support and gave the assurance that he was going to release 20 more albums before he draws the curtain on his music career.

U/E: I'll Restore Jobs Of Collapsed Banks’ Staff Who Were La...
5 minutes ago