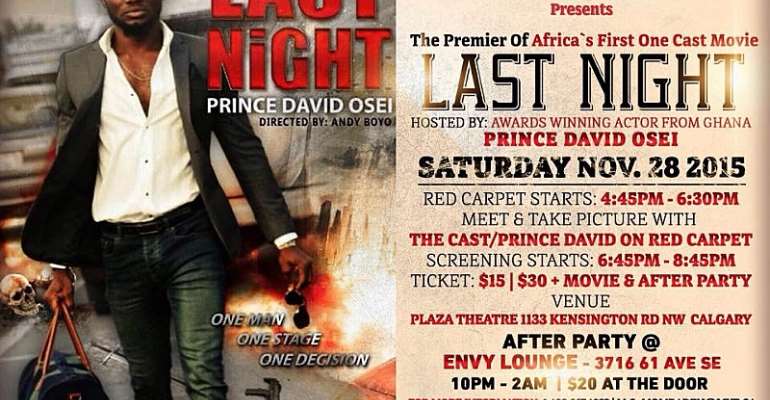 Prince David Osei set to embark on a worldwide tour with Africa's first One Cast movie directed by Andy Boyo and produced by Pdo productions, ” last night”. Europe,America, Canada, commencing from this November till next year 2016.

Guest Movie Stars to support the worldwide tour of “Last night” movie include Yvonne Nelson, Jackie Appiah, Toosweet Annan and many more. watch this space for more details on premiere dates and venue will be released in the coming day so stay tuned.

Speaking to ghkwaku.com, the actor revealed the rationale behind this tour stating that, the goal is to create an interactive relationship with fans in the Diaspora and promote great unparalleled artistic works of the actor who has starred in a Hollywood movie title the dead in 2011,Nanameansking a British movie, set to premiere at the silverbird cinema come 14th November ,also the first Actor to star in Africa's first One cast Movie which is a complete spectacle that dazzled a lot of fans in Ghana, during the premiere last month.

Prince David Osei is simply unstoppable now and undoubtedly one of the brilliant and successful actors from Ghana making great impact in the international scene.