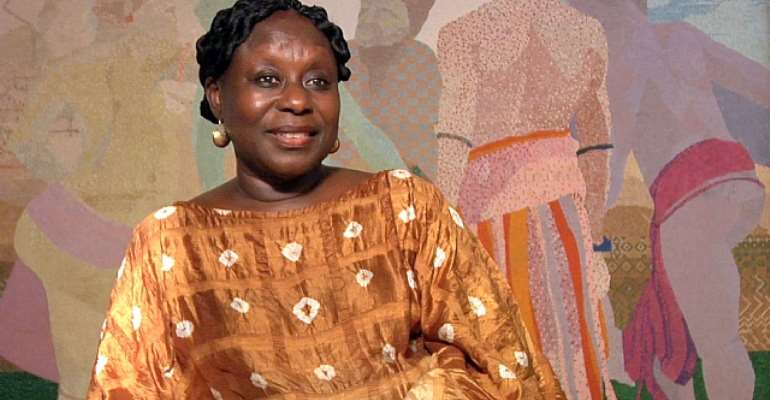 Marigold Akufo-Addo was born in 1947 in Accra, the capital city of Ghana. She went to school in Ghana and the United Kingdom and, after an interlude of two years' of extensive travel through Ghana, she returned to the United Kingdom to formalize her art education at the Central School of Art and Design and at the Slade School of Fine Art in London where she was graduated in 1971 after four years of studies. During this time she had her first solo exhibition at the Ambassador Hotel in Accra in 1968 and a subsequent exhibition at the Africa House in London's Covent Garden.

Nowadays Marigold Akufo-Addo is widely known for her specific painting technique of tiny squares, each measuring no more than a tenth of an inch. Those minuscule square boxes form the structural basis of her paintings and provide a twinkling underground of diverse topics which are depicted in evolving forms and changing perspectives. Akkufo-Addo uses this artistic language to deconstruct different art forms, textures and hues from the West African region and reposition and recombine those traditional influences in fluid forms of dialogue with modern styles of artistic expression. Her themes are often based in historic events incorporating multi-cultural influences of West-African, Moorish and old-Egyptian origin.

Besides the movement of people, often in a metaphorical meaning as historical movements from one point in history to the next, one of her major subjects is the dualism of captivity and freedom which she addresses both in poetic translations like the "Falcon" or in concrete political artworks like "Conflict Diamonds".

Marigold Akufo-Addo served on the board of Ghana's National Commission of Culture from 2003 to 2007. She has recently exhibited at spaces that include the Omanye House, the new location of Ghana's Artists Alliance, and The Museum Parliament House in Cape Town, South Africa, and is today one of the few widely acclaimed female contemporary artists in Ghana.

THE MAGHREB IS PAVED IN COUSCOUS