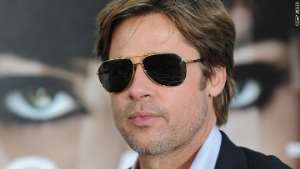 
Much like the rest of the world, Brad Pitt was touched by the story of the 33 Chilean miners who were trapped underground for more than two months before being rescued. Now, the 46-year-old actor is in talks to tell their tale on the big screen.

People.com reports that Pitt's production company Plan B – which he founded with ex-wife Jennifer Aniston – "has expressed potential interest in the story," according to company rep Jon Liebman, CEO of Brillstein Entertainment Partners.

"Like so many people worldwide, Plan B has been incredibly moved by the story of the Chilean miners and their families."

Though a lawyer for the miners told the Santiago, Chile, newspaper El Mercurio that Plan B offered millions for the men's story, Liebman shoots down those claims. "There have not yet been serious discussions," he tells People.

This wouldn't be the first time Pitt's Plan B has turned a true-life drama into a moving movie. In 2007, the company released "A Mighty Heart," which starred Angelina Jolie as journalist Mariane Pearl, whose husband, Wall Street Journal reporter Daniel Pearl, was kidnapped and slain by terrorists in Pakistan.