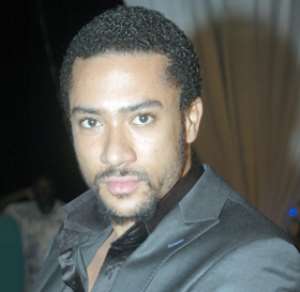 Majid Michel
Ghanaian actor, Majid Michel took nod for 'Best Actor' at the 2010 ZAFAA Awards held in London on Friday night. He won the award for his role 'Silent Scandal, written and produced by Vivienne Ejike. He was nominated alongside Segun Arinze, Ramsey Noah, and Ekpenyong Bassey Inyan, and according to insiders that category was the most keenly contested this year as all actors excelled equally well in their role.

Majid wasn't the only Ghanaian to shine on the night; actress Kalsoume Sinare Baffoe also picked up the award for 'Best Supporting Actress' for here role 'Trinity'. Also from the movie 'Trinity', child prodigy, Imogen Hogg won an award for her promising and outstanding role as a child actor. She made an excellent appearance at the venue and picked up her awards making Ghana proud.  Her parents flew her from South Africa to the ceremony, having relocated to South Africa few months ago.

Ghana had nominations in 9 categories over all alongside countries like Nigeria, Kenya, and Cameroun.