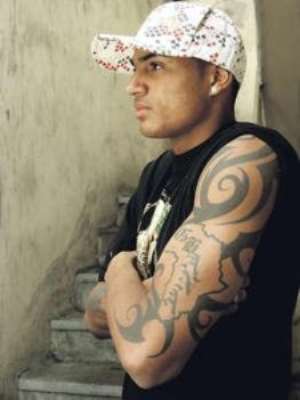 Kevin Prince Boateng
Don't you think is time for the Government of Ghana to tighten (or make changes) to the immigration policy? How on earth can Naija dudes come to Ghana and cause all kinds of crimes as if they live in their native country… There are several Nigerians who are using Ghanaian passports tarnishing the image of Ghana. It's so painful sometimes, and i blame it on some of our ignorant leaders. Several kinds of crimes have been caused by our Naija brothers in Ghana over the past years, checkout this latest development.

A 30-year-old man, has been arrested by the police for allegedly using the names of Kevin Prince Boateng, the Ghanaian international footballer, and other prominent personalities, including Lawyer Sam Okudzeto and the late President Eyadema of Togo to commit various acts of fraud.

The man, Prince Kamamokai, a Nigerian businessman, is among three Nigerians busted by personnel of the Visa and Documentation Fraud unit of the Criminal Investigations Department. The two others are Emmanuel Kalu, 36 an electronic technician, and Okezie Nnitch, 35, a cloth dealers.

Briefing the media in Accra yesterday, the Director-General of the Criminal Investigations Department (CID) Deputy Commissioner of Police (DCOP) Prosper Kwame Agblor said the suspects were arrested by the Documentation and Visa Fraud unit following a tip-off.

He said Kamamokai was arrested on Saturday at a bank at Kisseman, Accra, where he had gone to cash money. Mr. Agblor said the suspect, using the name of the German-born Ghana international, Kevin Boateng, forged documents to open a bank account through which he received money from people he defrauded.

He was alleged to have also forged a Togolese identity card in the name of Prince Eyadema, son of the late Togolese President Eyadema and other documents designed as 'Allianz Insurance USA' covering $25,500,000 which he claimed was willed to him by his late father, President Eyadema. He then made a false representation to the US insurance company that the treasure has since November 2002 lodged with Allianz Insurance Ghana Limited, a subsidiary of the US firm. 'The suspect again forged documents indicating that his lawyer is Mr. Sam Okudzeto who was processing documents to help him claim the inheritance from the insurance company in Ghana'.

Mr. Agblor said the suspect sent an email of the forged documents to the insurance company in the US to assist him with funds to claim the treasure.

The US Company became alarmed because the Ghana office of the company was opened in 2009 and wondered how a deposit could have been made in 2002. The Police were therefore alerted and they advised the US insurance company to feign interest and send $6,500 into the account of the suspect who was arrested when he went to the bank to cash the money.

In the case of Kalu and Nnitch, Mr. Agblor said the police swooped on then upon a tip-off that they were using names and credentials of prominent persons to defraud people. Police found their room at Sowutuom, a suburb of Accra, documents purported to have been signed by the Ministers of Finance and Economic Planning and the Interior, allowing them to transfer money into the country. A number of travellers cheque in pound sterling and dollars were also found during the search.

The ringleader, Enabor Agbe, 29, is however, reported to be on the run.The victim, according to a police report, was held hostage in a house at Baatsona on the Spintex road in Accra.

Investigations carried out so far, showed that from August 24, this year, when Ernest Fing arrived in Ghana, to October 8, the suspects had succeeded in extorting over $100,000 from him, with the excuse of preparing court documents, registration, and certification from the government agencies.

He was made to believe that he (Ernest Fing) had inherited a treasure of over $1 million from his late father and uncle, who were politicians and business moguls respectively in the precious minerals industry.

The Acting Director-General of the Criminal Investigations Department (CID) of the Ghana Police Service, Deputy Commissioner of Police (DCOP) Prosper Kwame Agblor, said at a news conference in Accra yesterday, that Ernest Fing was lured into the country about five weeks ago by the Nigerians mentioned above.

The CID boss noted that the Anti-Armed Robbery Squad of the department received information on the supposed abduction, and succeeded in rescuing him from his supposed kidnappers last Saturday.

Again, a Turkish citizen, Atila Inac, also known as Mohammed, was arrested for his alleged involvement in the production of fake visas in Ghana. Further investigations pointed out that Inac specialised also, in credit card thievery.

Inac has been described by the police as a specialist in the production of fake visas, and even defrauded one David Nii Abeka Buxton, to the tune of GH¢10,000 (¢100 million).

He charged the victim GH¢14,000 with a promise to secure him a United States visa. An initial payment of GH¢10,000 was made, while the remaining GH¢4,000 was to be paid when he (Inac) delivered the visa.

DCOP Agblor indicated that Inac was later arrested on October 4, upon returning the victim's passport to him with a fake American visa in it.

'A check made at the US Embassy, revealed that the visa is fake, and that the visa with foil number 67970278 was issued to a former Deputy Minister of Finance,' the CID boss said.

In another development, DCOP Agblor said the Documentation and Visa Fraud section of the Commercial Crime Unit also effected the arrest of Francis George Quarshie, who defrauded people by way of assisting them to process US diversity visa lottery, for fees ranging between $2,000 and $8,000.

According to the police, Quarshie demanded $8,000, and arranged a fake marriage in Cape Coast this year, between the complainant in the case, Prince Kasanga, and a lady (name withheld for security reasons) ,to act as husband and wife, in order to secure their travel to the US.

The complainant managed to make an initial deposit of $3,000, but Quarshie held on to the documents in a bid to deny them access for the visa interview, since they had not finished paying the remaining $5,000.

A search conducted in Quarshie's room, revealed a large quantity of American lottery forms and a laptop, which had information on previous transactions.