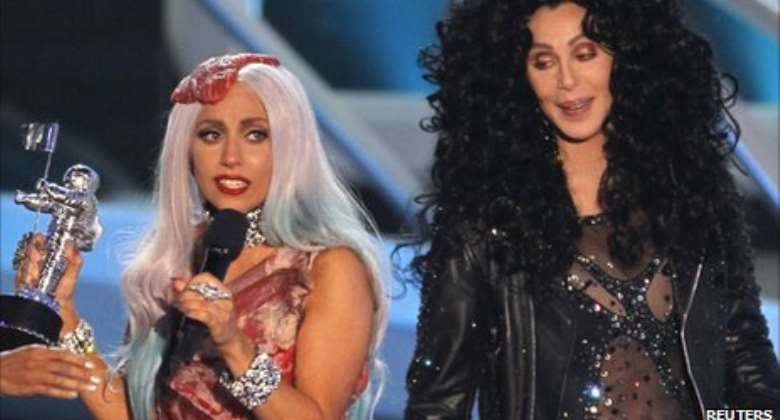 The singer, 24, who won seven of her "moon man" trophies for Bad Romance, cried as she picked up the top award from Cher at the end of the night.

"I was so nervous tonight that I'd let my fans down," she said.

'Cool kids'
After being presented with her final award, Lady Gaga, wearing an outfit which appeared to be made of meat, revealed that her new album would be called Born This Way before singing part of its title song.

"Tonight, little monsters, we're the cool kids at the party," she told fans.

The singer, who landed a record 13 nominations, also won in categories including best pop video, best female video and best collaboration - for the lavish, prison-themed video for Telephone, with Beyonce.

Her awards haul puts her level with A-ha, who won eight awards in 1986, as the recipient of the second-most MTV prizes in one night.

In 1987, Peter Gabriel won 10 trophies - including nine for his ground-breaking animated video to Sledgehammer.

British success
Rapper Eminem, who opened the evening's proceedings with performances of hits Not Afraid and Love the Way You Lie - featuring Rihanna - picked up best hip-hop video and best male video for the former song.

At last year's event, Kanye West stormed the stage after Taylor Swift won the best female video prize and said: "Taylor, I'm really happy for you and I'm gonna let you finish but Beyonce had one of the best videos of all time" - referring to the R&B star's black and white dance video for Single Ladies.

At Sunday night's awards - presented by comedian Chelsea Handler - Swift, 20, sang a new song called Innocent which appeared to be an acceptance of West's repeated apologies over the incident.

"Thirty-two and still growing up now, who you are is not what you did, you're still an innocent," she sang in the ballad.

"Everyone of us has messed up, too, I hope you remember today is never too late to be brand new."

West, who was booed by a few members of the audience, also performed and appeared to reference his behaviour.

"I always find something wrong," he rapped.
Best new artist Justin Bieber, 16, who was also one of the evening's performers, said: "I come from a little town in Canada, I never thought I'd be in this position."

The UK, meanwhile, was represented by rock band Muse, who won best special effects for Uprising, and Florence and the Machine, who won best art direction for Dog Days Over, which she performed at the awards.

Usher and Linkin Park were among other performers on the night.

Other winners included actor Jared Leto's band 30 Seconds To Mars, winning best rock video for Kings and Queens, and, in technical categories, Jay-Z and Alicia Keys, and The Black Keys.

Hottest Photo Reports
Catch up with all the political quotes from our politicians.
Advertise here
More from General News
ModernGhana Links
'Wasting money on unnecessary things' — reactions as Tracey Boakye erected billboards to climax her wedding
We need to learn to support people from their lowest, not when they've made it — Lydia Forson
You are free to trade sex for job if you believe it's worthwhile — Mr. Logic to unemployed ladies
TOP STORIES

E/R: Body of missing Chinese man found in dam at Esaase
31 minutes ago