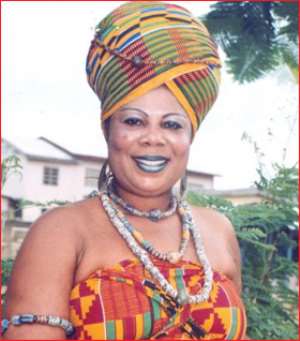 A courtroom at the Cocoa Affairs court in Accra was turned into a drama stage for Obra and Cantata groups last Thursday when the mother of a complainant 'acted' for bemused onlookers who were at the court premises.

A middle-aged woman, said to be the mother of actress Abena Achiaa aka Julie Juu, a member of both Cantata and Obra, suddenly, to the astonishment of the crowd, started to invoke curses of the dreaded Antoa Nyamaa goddess on anybody who spoke ill of her or her daughter, who is the complainant in the case before court.

A war of words had broken up between Julie Juu and supporters of the three leading members of the Obra group whom she had brought to court for contempt, claiming they buried the deceased film writer and actor, Nana Bosomprah, without her consent as his 'wife'.

In the ensuing altercation, the elderly woman claimed someone from the group called her names and described her as 'a dirty woman'.

The visibly upset mother of Julie Juu suddenly went into action, moved closer to the woman she alleged made the unsavoury statement and said “if you do not bathe me today, I swear Antoa Nyama would deal with you and everyone here who is insulting me and my daughter.”

In response to her curses, the supporters of the respondents jeered and booed at the complainant and her mother.

The court security swiftly moved in and called the group to order and warned them that they would be held in contempt of the court if they did not put an end to the 'show'.

While the 'Obra/Cantata show' unfolded, Grace Omaboe aka Maame Dokono, David Dontoh and Amankwa Ampofo, who have been cited for contempt of court for allegedly arranging the burial of the late producer, tried calming the rest of the group down, Julie Juu, who is at the centre of the altercation, remained in the courtroom to avoid confrontation with anybody.

Julie Juu later left in the company of her mother and sister after the police and security guards escorted them to a waiting taxi.

The case, presided over by Justice M. Iddrisu, has been adjourned to Tuesday, August 31 2010.

It will be recalled that at the last hearing of the case, former stage mates Julie Juu and Grace Omaboe engaged in a heated verbal brawl about the late Nana Bosmprah, with Julie Juu accusing Maame Dokono of being a hypocrite who did not care about the producer.

Achiaa's female relatives joined her to rain insults on Maame Dokono who they said had a sour relationship with Nana till his death. Maame Dokono, who did not take the insults lightly, accused Juu of being an opportunist while Julie Juu said she was envious of her.

It took about ten minutes for the remaining Obra and Cantata groups' members including David Dontoh to calm tempers down as they quickly whisked Maame Dokono away when things started getting ugly.

Achiaa, after the death of the producer, rushed to court to file an injunction restraining anybody from going ahead to bury Nana Bosomprah till a writ she had filed to be given due recognition as the legitimate wife of the deceased was determined.

Meanwhile, the late producer was said to have been married to a woman living in Germany with their three children for the past 30 years.

The plaintiff, Achiaa, filed an application for contempt of court against the funeral planning committee which included Maame Dokono, David Dontoh and Amankwa Ampofo and the head of the Bosomprah family as well as a “mortuary man” at Korle-Bu Teaching Hospital for burying the deceased while the case was pending in court.