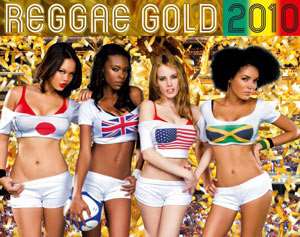 VP Records released the newest installment of their Reggae Gold series on June 22nd, 2010. The compilation is Reggae's most highly-anticipated release of the year. It Features 18 exceptional tracks, in a detailed sequence and represents the Reggae Hits for Summer 2010.

Reggae Gold 2010compilation features a varied assortment of significant reggae artists and hits. Gyptian's chart topping single “Hold You” sets the pace for this outstanding album. Keeping the vibe going is the feel good, Reggae Fusion track “Holiday” from Ding Dong featuring Chevaughn Claytonwhich is buzzing in dances from Jamaica to the U.S. We couldn't leave out the track that has been making it difficult for us all to find a pair of Clarks. The Gaza General Vybz Kartel featuring Popcaan, Gaza Slim'son fire track “Clarks” is included. Reggae and Hip Hop has always been closely related so we bring you the new banger “As We Enter” from the Distant Relatives Damian 'Jr. Gong' Marley and Nas. Steadily becoming a party favorite and sparking a new dance craze is “Skip to Ma Luu” by Serani featuring Ding Dong. Reggae Goldsmooths it out with Dancehall's favorite Deejay Busy Signal's romantic tune “Sweet Love (Night Shift).” Reggae Gold travels through theGullyside with Mavado's “House Cleaning” track. From record breakers to breaking records the album features Rising Star and a force to be reckoned with Romain Virgo's impressive track “Live Mi Life.”The compilation also includes tracks from International Reggae Star Shaggyfeaturing Tessane Chin “Never Let Me Go,” Major Lazer featuring Mr. Lex and Santigold “Hold the Line,” the legendary Beres Hammond's “No Apology, ” Tarrus Riley's “Love's Contagious,”the songstress Etana's new single “Happy Heart” and many more. Reggae Gold is all about hits and setting the benchmark for what is current and Hot in Reggae. This release proves why this series is the go to compilation in Reggae music and will always be.

For the past 17 years, VP Records has been at the forefront of reggae music with their Reggae Gold series. Since its inception this collection has featured the biggest songs of the year in reggae/dancehall but has also included music from international artists and crossover recording acts. Reggae Gold has featured superstars such as Beenie Man, Buju Banton, and Lady Saw. Reggae Gold is renowned for featuring dancehall and reggae hits, as well as tracks from up and comers in the Genre.

We can't wait any longer – CLOGSAG to embark on nationwide s...
26 minutes ago

Nat Nuno Amarteifio, former Mayor of Accra to be buried on F...
26 minutes ago