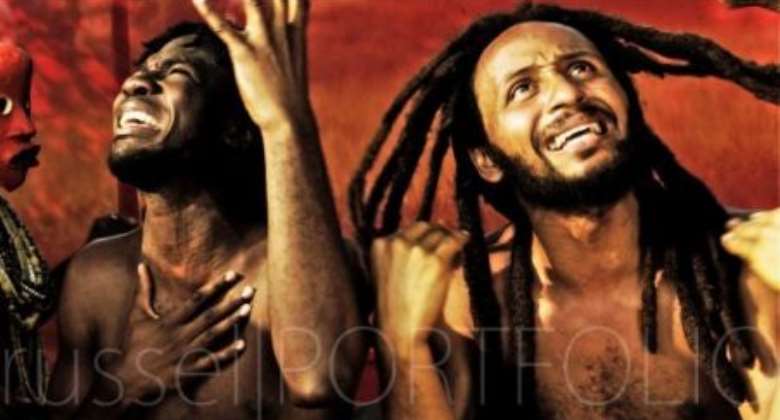 I am sure that Ghanaians by now have gotten used to seeing rapper Wanlov walking bare-footed in town in the usual wrap around his waist with little or no underpants beneath. However the free spirited artist together with friend and acclaimed composer/rapper/producer M3nsa, reveal a lot more on tape for their upcoming movie, 'Coz Ov Moni'. The two musicians weren't shy at all in showing bits of the backsides in several scenes in the simply hilarious flick. At a recent press preview, the two new members to the acting fraternity explained that the nudity in the flick wasn't in bad taste because it is not sexual in nature. So don't expect another 'Heart ofMen'!

'Cos Ov Moni' is an amazing pidgin musical trailing the 'hustle' of two friends within a day. The story unfolds as they wake up in the morning with one thing on their mind, to collect a debt owed them by a wily friend. After getting the money, they set off to blow it off on food, partying and women with hilarious and dramatic consequences. While going through the day, the story highlights real struggles of ordinary young Ghanaians in modern Ghana in spite of the strong elements of humour. Their ability to do this so subtly is something that makes me want to see more, but sadly Wanlov and M3nsa say they have given up on any acting ambitions following the torturous production schedule they had to go through in the past few months.

The 45-minute or so musical is a pulsating hip hop dialogue with each second of film laced with throbbing beats and rhythms that would have viewers bumping their heads as the story unfolds. There are also elements of black emancipation and the celebration of blackness, as the two lead actors struggle to separate reality from dreams. 'Coz Ov Moni' has cameo appearances from other stars such as Samini, Reggie Rockstone, Mokin, Panji Anoff and several others.

'Coz Ov Moni' is certainly a must-see when it is released later in the year. According to M3nsa and Wanlov, the movie is still going through a few tweaking here and there before it becomes available to the public, most likely before or during the Independence Day celebrations. There is a possibility that the final product would be slightly different from what I saw at the press screening however the humour and freshness in the concept behind the movie would never change and I recommend it to everyone, except maybe those below 16.

'Coz Ov Moni' is an ambitious production that clearly has never been attempted in Ghana and the perhaps the whole of Africa. It is therefore not surprising that the producers want to enter it into a few international film festivals before releasing it on DVD with extra 'behind the scenes' footage. I can only wish them luck and say unequivocally that I am proud of their effort.

Hottest Photo Reports
Catch up with all the political quotes from our politicians.
Advertise here
More from General News
ModernGhana Links
Akufo-Addo fooled, deceived us that he's rich and not in for our money yet all our money is in his pocket - Oboy Siki
I need security now - Kwame Dadzie fears being ambushed as people refer to him as carbon copy of ‘controversial’ A Plus’
Start arresting artistes who don’t perform after payment — Bulldog
TOP STORIES