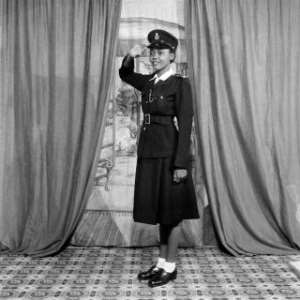 
Autograph ABP and the W.E.B. Du Bois Institute jointly present the first exhibition in the US of James Barnor's work.

A seminal collection that features a range of archival photographs, including street and studio portraits with elaborate backdrops, fashion shoots in glorious colour, and social documentary images from the late 1940s to the 1970s depicting a burgeoning modernity as the Gold Coast becomes Ghana.

Barnor's archive was produced during a career spanning more than sixty years. It does not cover a remarkable period in history but also bridges continents and photographic genres, creating a transatlantic narrative marked by his passionate interest in people and cultures. Through the medium of portraiture, Barnor's photographs represent societies in transition: Ghana moving towards its independence and London becoming a cosmopolitan and a multicultural metropolis.

Alongside the photographic display, we are proud to present the award-winning Black Audio Film Collective feature film 'Testament' (1988), directed by John Akomfrah, an experimental narrative of exile, Diaspora and dispossession.

This exhibition is closely linked to the establishment of Autograph ABP's Archive and Research Centre for Culturally Diverse Photography (opening in Spring 2011) at Rivington Place, London and emerged as a direct result of archival research supported by the Heritage Lottery Fund. A major James Barnor retrospective is scheduled for October 2010 at Rivington Place, London, UK.

James Barnor was born in Accra, Ghana, in 1929. He started his own photographic practice in 1949 in a makeshift street studio in Jamestown, until he opened Ever Young Studio in 1953. In the early 1950s, he began working for The Daily Graphic newspaper and later Drum magazine. He came to England in December 1959 to study photography at Medway College of Art in Rochester, Kent.

He continued working for African lifestyle publications before returning home in 1970 to establish the first colour processing laboratory in Ghana. During the next 24 years, he also worked for the American Embassy and for J. J. Rawlings at Osu Castle. In 1994, he returned to London, where he currently lives.