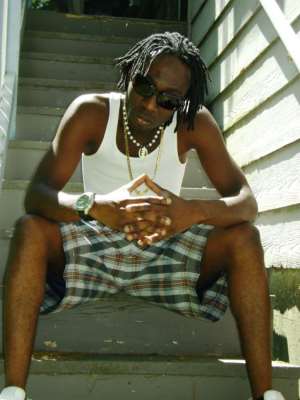 With 10 mix tapes to his credit, US-based Ghanaian rapper Smalls certainly is perfecting his rapping skills for a gradual emergence on the hip-hop scene. Born Joseph 'Nakwesi' Andoh in Worcester, MA, Smalls has been rapping since age 15 when he did his first 'show' at an outdoor battle of the bands showcase.

Although the rapper doesn't have an official album yet he's been extremely prolific on his 10 mix tapes all with an average of 14 tracks. He has also participated on two underground albums with a group of unknown artists during his school days as well as two live radio CDs which was essentially him and a group of artists rapping live on air for 2 hours. His mix tapes include: Smalls & Stretch, Gyname, Throwback, Flocation, Justice, The Briefing I, The Briefing II—special report, A.D.D (Afrikan. Dun. Did-It), Watch Out, Smalls Reloaded (best of pt 1), Radio Cypha part I & II. The other albums are Black Eyce and Black Eyce B.T.T.B (back to the beginning).

Already drawing comparisons to New York hip hop maestro, Jay Z due to similarities in style, Smalls draws a lot of influences from Jay Z himself and other hip hop royalties. His music, music videos as well as several updates are available mainly his page www.myspace.com/smallsjustnice. There will soon be an official website which would fully provide more of Smalls sounds, pictures and videos as well.

I caught up with the talented rapper to find out more about his music, influences, inspirations and aspirations.

Ameyaw Debrah: What kind of music do you do?
I do hip hop infused with a lot of other musical influences to make a genuine sound. So, I would say hip hop infused with rock and a mixture of soul and African hotness. I rap about whatever is on my mind and whatever the beat makes me feel like.

Ameyaw Debrah: Which artists do you draw influences from?

The spectrum is too broad but to name a few. My influences range from the melodious voices of Gladys Knight, Al Green, Luther Vandross and the Jackson 5 to Biggie Smalls, Beastie Boys, NWA, LL cool J, Jay z, Nas, Tupac, Lauryn Hill, Flip Mode Squad. Those are just the tip of the iceberg of artists that have made me evolve over time.

Ameyaw Debrah: One of your latest singles is 'Jane'. What inspired it?

Jane in general is a song about addiction. Everyone has an addiction of some type whether it's food, women, sex or drugs. I wouldn't' say that I am addicted to cannabis, though I am a user. However, I thought from my standpoint that I use cannabis as the subject because not only was it suitable from my standpoint, but for the theme of the song. I thought it would be a crazy idea to expose this type of addiction; this normal addiction disguised as if I was talking about a female. Since cannabis is also known as Jane or Mary Jane from a creative standpoint it was a hit to be so I did it.

Ameyaw Debrah: Are you in touch with Ghanaian roots?

I have been in contact since childhood, with my family and cousins writing letters to my brother before he came to the US in 1987. And since I finished school and made a little cash, I go every two years starting from 2003. So, I have been there a total of 2 times and I am ready to go this coming February for the anniversary of my uncle's death in Kumasi. I know Adum, Kumasi fairly well and they have my CDs there. I took a whole bunch there and when I go there I stick out. I guess I look too good; that is what I like to think (Laughs out Loud).

Ameyaw Debrah: What is your impression of Ghanaian/African music from U.S.?

I am very optimistic about any new sound that is not the norm. However, African music from the U.S. to me is a gift and a curse. A gift where it 's a new sound that can further open the genre of music but at the same time I tend to see a lot of African musicians based in U.S. catering to just one crowd, the Africans. How do you expect to expand when you are not making yourself expandable? The only way to do that is not to just cater to one group but to cater to all as much as possible to get people on a massive wave to enjoy the sound. That is what is lacking on both aspects of African music whether it's from U.S or Africa.

Ameyaw Debrah: Do you have any plans to promote your music in Ghana/Africa?

I have property in Kumasi so I figure that the best way for me to put my music out there is to establish a base. In my case, I have a overall plan of opening a studio to get work going on in Ghana but also to have an avenue of being able to make music in Africa with Africans.That to me is an important key for promotion at a foreign place.

Ameyaw Debrah: How do you think Africans would receive your music?

For the most part, the ones that understand music and are open minded, love it but there are some who just don't get it and are quick to classify my sound as noise. It is one of those things where I just have to do my best to try and get as much ears open as much as possible. The more ears the more reception

Ameyaw Debrah: What do you to achieve with your music?

Everyone wants to live doing what they want to do and enjoy. My enjoyment is music and if I can live comfortably doing that, then that is what I am looking for.

Ameyaw Debrah: What are you currently working on?
Right now I am working on the 'smallsjustnice' website and getting ready to make some more tracks and hopefully make noise to the right ears to really get my sound out to a massive crowd. Doing what I do best, talk on beats.

Hottest Photo Reports
Catch up with all the political quotes from our politicians.
Advertise here
More Interviews
ModernGhana Links
Stop stealing songs – Songwriter to 'lazy' musicians
I Want To Use Music To Connect To My Fatherland — Fadu
Vodafone Ghana Music Awards 2021: Diana Hamilton Grabs 6 Nominations
Ladies are not Ready to Build with any Man...Flora Jacobs
Salma Mumin Debunks Rumour That She Removed Her Butt
WATCH: Travel the world amidst COVID-19 with Jynna Asiedu-Ofei and her Borga Diaries
Teni: Humanity Over "The Industry"
We Had Sex In A VIP Bus---Fameye Recalls Regrettable Experience
All Those Who Made Promises At My Father's Funeral Have Not Fulfilled Even One--Late George Forest Son
TOP STORIES