I Knew It Was Coming – Dan Botwe 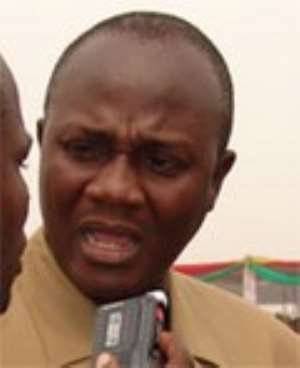 'It was cos I supported Mac and Co openly'
'I was not naive'
An astonishing 90 percent and 87 percent of callers to the leading FM stations PEACE FM and Joy FM respectively, went on air – if you want to talk to God, speak to the wind- that they were distressed about the dropping of the two most distinguished men in the New Patriotic Party Government (NPP). For most Ghanaians, including, interestingly enough, National Democratic Congress key players and communications Chiefs Messrs Ofosu Ampofo and Hon. John Mahama, it was unthinkable that the duo (Dan and Yaw) could be dropped since they are the front line achievers in politics and in effective delivery and execution of government programmes.

Dan Botwe, who is the iconic leader of the past General Secretary of the New Patriotic Party (NPP) and the immediate past Minister of Information has described as untenable reports that he was nursing presidential ambitions to succeed the incumbent President, Mr. John Agyekum Kufuor. He went on to poo-pooh the report which was written by The Statesman's editor in Chief and communications manager of Nana Akufo Addo, had the potential to negate substantial and credible reports that the legendary political maverick Dan Botwe, is the defacto Campaign manager of Hon.Yaw Osafo Maafo, seen as the biggest obstacle to his candidates chances. “I have not been nursing presidential ambition.

This is a Machiavellian way of going about things. All these things have a place in politics. It is never true that I have presidential ambition,” he said. Mr. Botwe, whose dramatic removal from his post by the President, after a meeting which lasted all of two minutes, told Vibe FM's Kuuku Welsing Jones on Monday. According to the NPP whiz kid, who led the party to two successive victories under his tenure of office as the General Secretary was of the view that his exit was a result of what he said during the party's congress at University of Ghana, Legon last December, with regards to those that he learnt his support to.

He noted that even though such Machiavellian tactics have place in politics, it would be prudent for the party to focus and concentrate on consolidating the gains it had chalked to enable it win the next elections. “We should use the remaining two-and-a-half years to sharpen the NPP and ensure that we fulfill our manifesto promises. We need to work hard and present our manifesto to the people,” he stated, emphasising that “We should put our energies together and make sure that we win the confidence of the people.”

Mr. Botwe noted that he was not surprised about his exit from cabinet, saying, “I knew that it would come because of what I said at our congress. I was not naïve. I was prepared for it,” he said. Pledging his allegiance and commitment to the NPP, he said, “I am still a member of the party. I am still a member of the national executive council. I still have a leadership role to play in the party. We would do the politics as we do.” Acknowledging complimentary remarks from party members and members' concern about his performance, he intimated that he could not ignore the overwhelming good will of the masses towards him.

Mr. Botwe, who is now jobless, stated that he has already been consulted by some countries for a consultancy job, said, “For me, I should spend 40 days praising God for what he has done for me. The support from (the entire) political divide encourages me to work for the party and the nation.” Asked whether he would accept any ambassadorial position, a major demotion, Mr. Botwe laughed at the suggestion, stating emphatically, “I will not take it,” adding that he would want to put his expertise at the doorsteps of the party to win 2008 elections.

Mr. Botwe, described as an upright, courageous person who speaks his mind without fear or favour, was the first to pledge his unflinching support to the ruling party, immediately after falling casualty to President John Kufuor's last Cabinet clear out. He was followed by the MP for Oda, Mr. Yaw Osafo Maafo, who did his through a press release and then Dr. Kofi Konadu Apraku, also the immediate past minister of Regional Integration and NEPAD.

He has denied also suggestions in some media circles that he was operational manager of Mr. Osafo Maafo's presidential bid, saying it is a subject that had never been discussed between them, but that at the appropriate time he would do what is right.

"All Trained Teachers From Colleges Of Education Were Duly E...
11 minutes ago