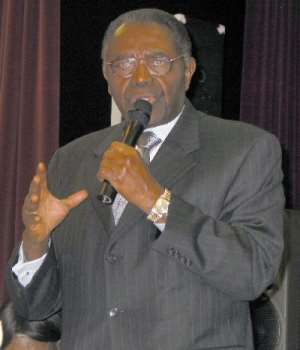 At the diner to commemorate Ghana's 49th Birthday an incident occurred that nearly marred the function.

The incident involved an aspiring Asantefuohene of Toronto, Nana Bandoh, the Consul General of Ghana in Toronto, Nana Boahen and the High Commissioner of Ghana, H.E. Samuel Odoi-Sykes(pictured).

Sources available to this newspaper indicated that about 6:30p.m. just prior to the commencement of the function, three persons identified themselves as police officers came to the Banquet Hall where the function was to take place and spoke to a number of people. They also produced what was reported to be a photograph of Nana Bandoh and asked whether he was present. Soon afterward guests started arriving at the function, among them were the High Commissioner of Ghana, H.E. Samuel Odoi-Sykes and the Consul General of Ghana in Toronto, Nana Boahen.

At that point the drama started unfolding.

The organizers of the function sensing a possible potential problem at that point informed the High Commissioner that Nana Bandoh(Asantefuohene of Toronto) was restrained from being in an immediate area where Nana Boahen(Consul General of Ghana in Toronto) happens to be.

Sources further stated that the High Commissioner was unhappy about it and threatened to leave the function if indeed Nana Bandoh and his entourage could not be present at the function.

At that point the High Commissioner angrily left the banquet hall.

The question a lot of people asking in the community is whether the organizers were aware of the situation between Nana Boahen and Nana Bandoh. If so why didn't they anticipate such a problem involving both parties?