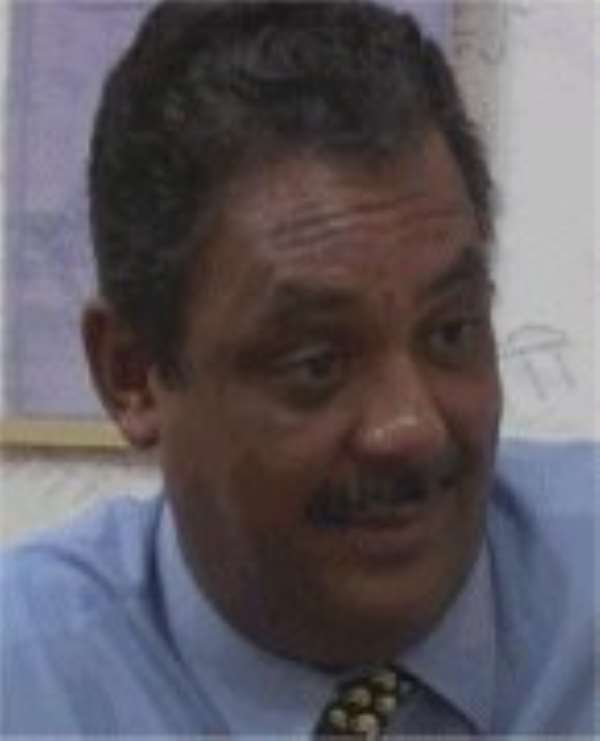 ...... The Mystery Begins To Unravel The mystery and mystique surrounding United Rail (International) Co. Ltd. (URI), the UK-based Company that has set up United Rail (Ghana) Ltd in Accra to bid for the Ghana Railway Company Ltd, which we reported as deepening in our issue last Friday, has finally begun to unravel.

It is now becoming clearer why Professor Christopher Ameyaw-Ekumfi, the embattled Minister of Ports, Harbours and Railways, stutters and cannot talk properly when URI is mentioned, and why he has been avoiding radio interviews these days ever since his disastrous showing with NDC's Director of Research Kwamena Ahwoi on Joy FM, the last time he spoke publicly on the subject.

It is now also becoming clearer why Mr. Matthew Bruce Burrows, self-styled Chief Executive of URI and leader of the URI negotiating team from the UK negotiating with a Government of Ghana team to take over the Ghana Railway Company Ltd, suddenly refused to talk to Radio Gold's James Agyenim-Booateng when reached on phone last Sunday and Monday at the London address.

It all seems to come down to one person. Jake Otanka Obetsebi-Lamptey, Minister of Tourism and Modernisation of the Capital City, appears to be the shadowy figure behind all the manipulation and shenanigans to get URI to take over the Ghana Railway Company Ltd at rock bottom price, probably “asset strip” the ailing state-owned enterprise, and collapse it as has happened to several World Bank advised railway buyouts in West Africa, including those in Sierra Leone and Guinea.

Where does Jake Obetsebi-Lamptey come in?

At his first Press Encounter on URI, Minister of Ports, Harbours and Railways Professor Christopher Ameyaw-Ekumfi disclosed that URI is owned 50%-50% by Trackbed Ltd (UK) and Holdtrade (UK) Ltd, the latter with registration number 03231657.

Trackbed (UK) Ltd, as both 'Ghana Palaver' and Radio Gold have uncovered, was dissolved on 19th October 2004, prompting Matthew Burrows to do an about-turn to say that the Company in question is actually Trackbed Foundation, about which he is not prepared to talk because the owners insist on anonymity.

Holdtrade (UK) Ltd, it has been established, is owned 30% by Matthew Bruce Burrows, the leader of the URI negotiating team, and 70% by Intertechnology Investments Ltd, registered in the British Virgin Islands as an Offshore Company.

The other shareholder of Holdtrade Mining Ltd, Frank Randolph Roberts, has a Sierra Leonean father, one Dr. Roberts, who used to work in Ghana.

Frank Randolph Roberts grew up together with Jake Obetsebi-Lamptey and the two are the best of friends. The two were last seen together publicly at a party with a lady by name Anita, a grand niece of Senior Minister J. H. Mensah, only a few weeks ago. Close associates of Jake and Frank confirm that Mr. Roberts fronts for Jake in many of the latter's businesses.

With these chips now falling into place, it is no wonder that the politically naïve Professor Christopher Ameyaw-Ekumfi is falling all over himself to ensure that URI lands the Ghana Railway Company divestiture, while in the process dragging a respectable but equally politically naïve academic like Professor (Mrs) Henrietta Mensah-Bonsu and a damned good professional but also an ignoramus when it comes to shady deals like lawyer Kofi Bucknor, down with him.

Dan Botwe to drop MMDCEs list on Sunday
5 minutes ago