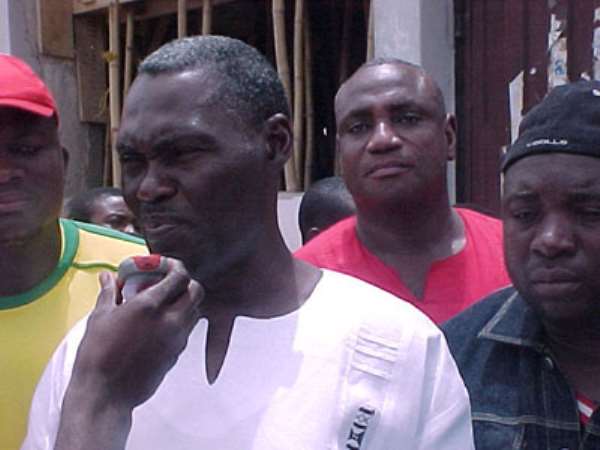 But he insists some board members orchestrated the whole incident.

"I hate faceless cowards. I know where they are coming from, and very soon I will advise myself accordingly", Major Larson told me in an interview yesterday.

He said he would meet the Board Chairman, Paul Victor Obeng, after undertaking some investigations into the planned attack, "and after that I will come out openly on the way forward".

Major Larson was not the only person who attracted the fury of the fans. Technical Head, Malik Jabir, had his share all right, with the fans saying that he was bereft of ideas in modern football and incapable of handling a big club like Kotoko. They consequently warned Malik never to step at the Kotoko training grounds again.

It was indeed hell at the Stadium as King Faisal's president, Alhaji Karim Gruzah, played the role of the "good Samaritan" by whisking the CEO away in his Gruzah's Mercedez Benz saloon car.

It all started around the 50th minute of the match when Kotoko were leading 1-0, when some of the supporters, apparently disappointed at the rather ordinary performance being put up by the team, charged near the VIP box where Major Larson was seated.

For close to ten minutes the fans used all sorts of unprintable words on the retired army officer who watched the scene rather helplessly as the fans raved and ranted.

It was when the situation was getting out of hand that Alhaji Gruzah beckoned Major Larson to accompany him outside, where he boarded the Alhaji's car and left the stadium never to return again.

The supporters accused Major Larson of rejecting some good old players and going in for mediocre performers.

They did not understand why a tried and tested player like Michael Osei should be exchanged for an ordinary player by name Osei Akoto of Liberty Professionals.

According to the fans, the Kotoko management also failed to pay ¢80 million and ¢100 million to renew the contracts of some old players like Michael Asante and Yusif Chibsah, only to pay between ¢150 million and ¢ 250 million for some new recruits whose output comes no where near the old players.

They feared that the current Kotoko team would not earn any respectable position in the league, looking at the quality materials around.

The supporters said until management did the right thing, they would not give them the peace to administer the club and would demand their resignation.

When the game was all over and Major Larson was nowhere to be found, the fans decided to vent their anger on coach Malik. Security personnel managed to give cover to the coach and whisked him away to safety.

When I spoke to Major Larson yesterday morning, he minced no words about plans by some board members to get him out of the club but said "I am not bothered at all by such machinations".

He expressed regret about the stadium incident, especially when it was the fans themselves who not long ago were on the neck of management to go in for the recruited players, and also demanded discipline in the club.

Major Larson said some of the old players have been around for five and six years and said there was the need to look for fresh faces.

Even then the decision to do away with some players and go in for new ones was not taken by management, but the technical team with the backing of the board.

The CEO, therefore, questioned why he should be accused of going in for mediocre players. Major Larson denied that he is being paid ¢25 million a month, and said even if that was his monthly salary there was nothing wrong with it when weighed against the fact that the CEO of Ashangold takes $ 5,000 a month.

" If Kotoko which is the biggest club in the country pay its CEO ¢25 million I don't see anything wrong with it", he said.

The CEO said no chairman in the history of Kotoko could match up to his performance in just one year in office.