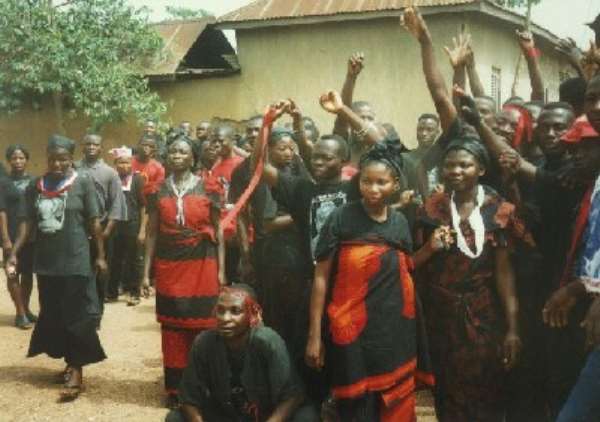 Gomoa Kokofu (C/R), Feb 7, GNA - The Gomoa District Assembly is to enact by-laws to cut down the cost of funerals in the area. Mr Fred Oscar Abban, Presiding Member of the Assembly who announced this at a five-day conference of the Gomoa Akyempim Islamic Community at Kokofu said funerals had become "capital intensive," which was having a negative effect on families especially women.

He said the Assembly would ban the sewing of uniform wax prints by families for funerals and stated that the money used for such ventures could be used to pay the school fees of their children and wards and for house keeping instead of funerals.

Mr Abban noted that apart from the high cost of funerals they had become the "breeding grounds" for promiscuity.

He said the District Assembly was making efforts to reduce poverty in the area through the Poverty Alleviation Fund and other Micro Credit Schemes especially for women.

The Presiding Member announced that the Assembly would also ban video and cinema shows for school children and minors as part of the efforts to reduce teenage pregnancies and school dropouts. He stated that the government had provided infrastructure for schools to ensure that children roaming the streets were enrolled and said the Assembly would provide more quarters in the district to attract teachers to accept posting to the area.

Mr Abban noted that in spite of the efforts by the Assembly, most parents were adamant in ensuring that their children had education and appealed to them to change their attitude.

He expressed regrets that some of them complained about money problems but were able to mobilize funds for funerals and other social that did not benefit their children and society.

The Head of the Gomoa Akyempim Muslim community, Imam Sulleman Abdulai, appealed to the government and the District Assembly to stock the libraries of the Islamic Primary and Junior Secondary Schools with books to promote teaching and learning. He asked Muslim parents to send their children to school since education was the key to development.

Imam Abdulai called for unity and understanding between Muslims and Christians to promote peace and stability He prayed for President John Agyekum Kufuor, Ministers, Members of Parliament and other leaders in the community for God's protection and wisdom to ensure socio-economic advancement.

Mr Mohammed Ayuba, Secretary of the Gomoa Akyempim Islamic Community, appealed to the people to change their attitude towards sanitation to avert an outbreak of communicable diseases. He also asked the people to avoid indiscriminate and premarital sex to curb the spread of HIV/AIDS and teenage pregnancies.