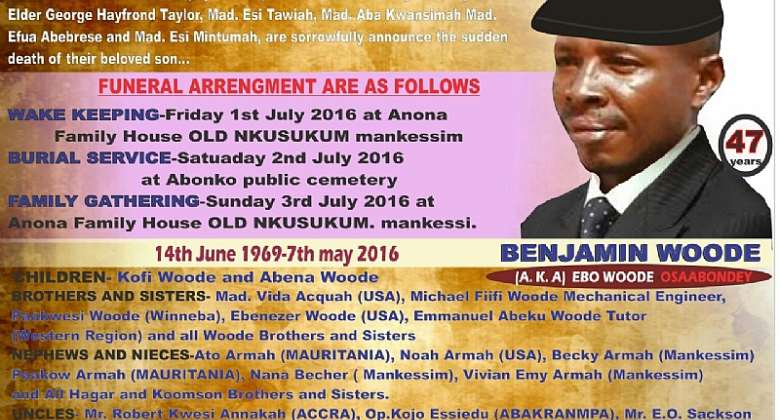 A Ghanaian top dance master who thrilled patrons and judges at many dance contests/competitions including the Embassy Double Do/ Triple Do and all the major Dance Competitions in Ghana in the 80s, 90s and early 2K, Mr. Ebow Woode of Mankessim has joined the ancestors after a protracted illness.

Mr. Benjamin Woode aka Ebow Woode aka OSAABONDEY is from one of the elite families at Mankessim, the Woodes. Educated at the Urban Council School, Ebow Woode started his training in arts under master dancers, Kenneth Buaku of Tema and brother Jimmy Lee. Ebow not only learned how to dance but also how to be a total performing artist. At the regional level, he danced his way and won every contest held, competing with regional giants such as Maputo, Sir Gorh, Big Father Kay, Skinny, Nana Robot etc. At the national level, he contested with the likes of Slim Buster, Sir Robot, Alossey Jay, Ebo London, Azigiza Snr and many more. Mr. Ebow Woode entered the Embassy Double Do many times and became running up in most of the times he contested. Many critics condemned the judges for their biased verdicts because he was always the toast of the fans. Mr Ebow Woode however, swept all the prizes at all the district events displacing top dancers such as Takyiman, Kojo Paulo, late Opamfo, late Sister Mercy, Sister Damugyan, late Kofi Bentsir and others . As a result of his popularity, he was invited to many communities including performance tours to Nzema and Brong Ahafo where he became a household name.

In his spare time, he trained many young people to learn how to perform modern dance for health benefits. He also worked as the barber of style for many well-to-do people in the community. He also took the opportunity to learn to become a professional visual artist ( Photography and Video Production) by understudying Brother Jimmy Lee.

"Mr. Ebow Woode was very friendly, had a sense of humor,hardworking and learned" is a summary from most of the people at Mankessim who knew him. He would be fondly missed.

Mr. Woode left behind 2 children, Kofi Woode and Abena Woode and is mourned by many siblings both home and abroad.

E-Levy: No amount of talks or reduction is needed; just scra...
10 minutes ago