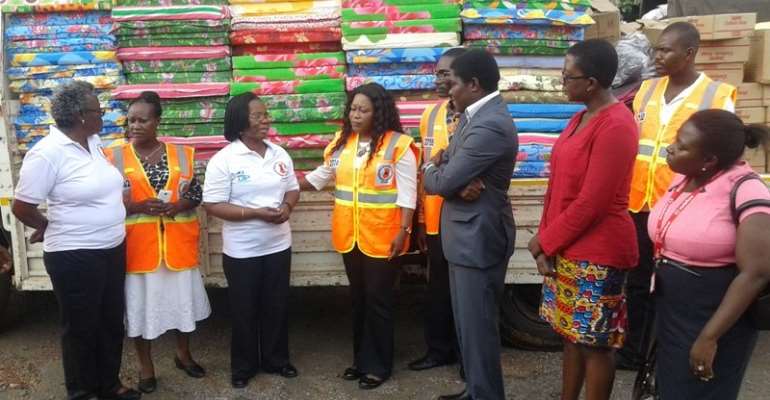 Accra, June 13, GNA - Vodafone Ghana has donated variety of items to support the victims who lost their relatives and means of livelihood through the downpour on June 3.

Among the items donated were mattresses, blankets, washing soap and detergents, and food items, which was offered to the victims through National Disaster Management Organisation (NADMO).

Mr Haris Broumidis, Chief Executive Officer of Vodafone Ghana said they are saddened by the impact of the tragic incident and damage caused.

'The Foundation will organise health fest, our free health screening exercise for residents in communities affected by the floods, starting this weekend,' he said.

Mr Broumidis said the Foundation would also be spearheading a blood donation exercise aimed at encouraging employees of organisations within the Airport City enclave to donate blood to support the flood and fire victims.

'The exercise, which is scheduled for Saturday, 13 June, is also open to the… public'.

Mr Ebenezer Amankwah, Corporate Communications Manager of Vodafone Ghana, said the telecommunication company is undertaking impactful interventions to meet the immediate needs of the flood victims, support key health institutions handling cases related to the disaster, and deal with the health impact and risks associated with the flood.

He said the donation was part of a two- week comprehensive support package by the Foundation which was supported by the United Kingdom Vodafone group with an amount of £ 100,000.00.

'As a company, we are committed to where our workers live and work, we cannot just be here providing telecommunications and be oblivious to the plight of the community on a national proportion,' he said.

He explained that the Foundation would also seek to support the provision of medical supplies to hospitals to treat victims; offer information on the prevention of cholera and help with safe and secured shelter for affected communities.

Mr Amankwah said since the establishment of the Foundation, it has moved from just funding projects to investing in developing sustainable initiatives that solve pressing social issues and benefit several communities in the country.

The Corporate Communications Manager mentioned initiatives such as Mobile for Good that has been a mind opener on how technology could be used as a medium to change lives.

He said the Healthline - 255, Ghana's first ever health call centre has been empowering Ghanaians with health related information and the Healthline mobile "app" initiated by the Foundation continues to serve as a great platform for information sharing, given the current digitised dispensation.