Ghana appears before UN Committee on Rights of the Child 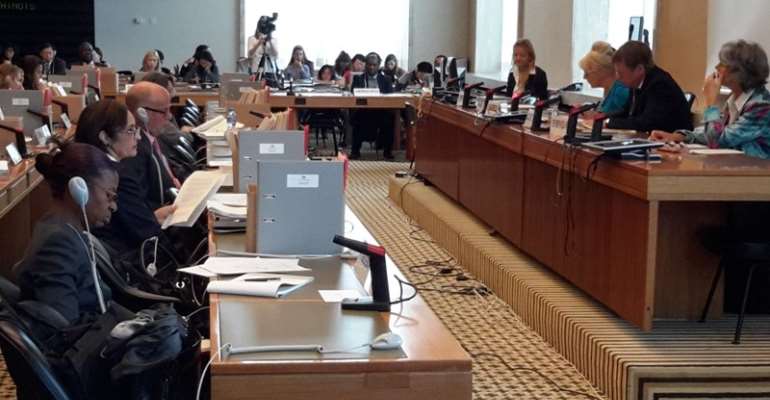 Geneva, May 19, GNA - Ghana is among six other nations appearing before the 69 session of the United Nations Committee on the Rights of the Child (UN-CRC) to respond to issues raised by the committee.

The issues are on the implementation of the convention on the rights of the child.

Eritrea, Ethiopia, Honduras, Mexico, Nepal, and the Netherlands are also expected to defend and present reports on issues raised by the Committee.

Eighteen independent experts of UN-CRC monitor the implementation of the Convention on the Rights of the Child by its state parties.

It also monitors implementation of two optional protocols to the convention, on involvement of children in armed conflict and on sale of children, child pornography and child prostitution.

On December 19, 2011, the UN General Assembly approved a third optional protocol on a communication procedure, which allows individual children to submit complaints regarding specific violations of their rights under the convention and its first two optional protocols.

The protocol entered into force in April 2014.
Nana Oye Lithur, Minister of Gender, Children and Social Protection who is leading Ghana's delegation, explained that Ghana would present her final responses to the committee on list of issues raised on the 3rd, 4th and 5th consolidated periodic report on the implementation of the Convention on the Rights of the Child.

Speaking to the Ghana News Agency, Nana Oye Lithur said government made a promise to optimise the realisation of children's rights when it ratified the Convention on the Rights of the Child in 1990.

She said the ratification of the convention set the stage for improving the general conditions of children in Ghana through legislation, policy formulation, legislation, programme and project implementation, research, monitoring and evaluation with respect to quality care.

The Gender Minister explained that the present report is the third, fourth and fifth consolidated periodic report of Ghana to the United Nations Committee on the Rights of the Child.

Nana Oye Lithur said: 'It is the firm belief of Ghana that the report findings will serve not only as assessment material, but also an encouragement to governmental and non-governmental institutions, parents, community leaders, and other relevant child caregivers to continue to fulfil the rights of the child always ensuring the best interests of the child when dealing with all matters that affect children'.

The report assesses the progress made by government in regards to the advancement of implementation and the status of children in terms of adherence to the principles of the Convention on the Rights of the Child, and the realisation of their rights and freedoms at home, school and all other places in which they often find themselves, and the provision of their needs.

The report also chronicles responses of child-focused state institutions in their efforts to ensure children's rights and improve their access to quality education, health care, social welfare, protection and all other areas that affect child development from 2005 to 2010.

Children's voices have also been echoed in the report.

The report reveals modest achievements made and challenges encountered by government and its partners to address important needs and gaps of children in the enjoyment of their rights in Ghana.

It also responds to certain important observations made by the Committee on the Rights of the Child on the previous reports submitted by Ghana to the Committee.