All Eyes Now On Athletes 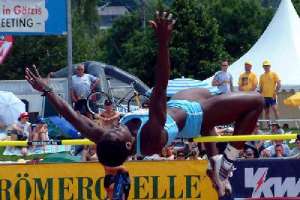 Starting today Ghana begins her quest for honours in track and field events at the Athens Olympics.Today, Vida Anim will be in action in the women's 100 metres event, with Margaret Simpson, Andrew Owusu and Akosua Serwaa taking part in heptathlon, triple jump and the 800 metres events respectively.

Tomorrow, a relay team of Aziz Zakari, Eric Nkansah and Leo Myles-Mills will also be in action. Speaking in an interview with the Graphic Sports yesterday, Chief Athletics Coach, S.S. Atuahene, said morale in camp was very high.

He said the athletes were determined to give of their best to bring honour to themselves and the country. According to him, promises by Education, Youth and Sports Minister, Kwadwo Baah Wiredu, and GOC President, B.T. Baba, that good rewards await them have boosted their morale to go for nothing but the best.

He denied speculation in some quarters that some unfit athletes were brought to the games.“Every athlete here is here because he or she passed the fitness test to represent Ghana,” he noted.He said following the elimination of the Black Meteors, the athletes are aware that all attention is now on them to defend the flag of Ghana.

“This they have vowed to do to the best of their ability,” the coach assured.Ignatius Gaisah who is the only high profile athlete in town was expected to join the squad yesterday.Meanwhile, the IOC has renewed scholarships for Margaret Simpson, Vida Anim and Aziz Zakari in line with the commission's policy of assisting outstanding athletes who help advance the Olympic cause.