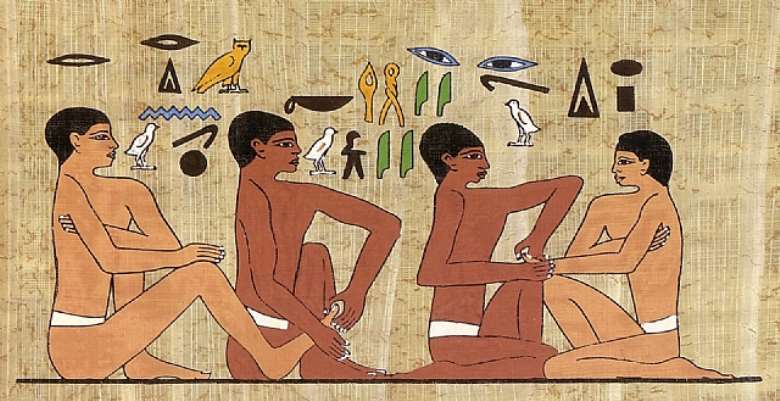 The practice of using touch as a healing method derives from customs rooted in ancient history. Civilizations in the East and West found that natural healing and massage could heal injuries, relieve pain, and prevent and cure illnesses. What's more, it helped reduce stress and produce deep relaxation.

An Oasis of Calm in a Busy World...
Massage therapy began as a sacred system of natural healing. However, cultural shifts rendered it a disreputable form of indulgence for extensive periods of history. Enduring these turns, massage has experienced resurgence in modern times. Today, massage therapy stands as a highly respected holistic healing method practised across the world.

Archaeological evidence of massage has been found in many ancient civilizations including China, India, Japan, Korea, Egypt, Rome, Greece, and Mesopotamia.

BC 2330: The Tomb of Akmanthor (also known as "The Tomb of the Physician") in Saqqara, Egypt depicts two men having work done on their feet and hands, presumably massage.

The earliest written records of massage therapy were discovered in Egypt and China. Tomb paintings in Egypt depict individuals being kneaded by others. Furthermore, Egyptians are credited with creating reflexology in approximately 2500 BCE. In this system, the practitioner applies pressure to specific points or reflex zones on the feet and hands. In turn, the recipient experiences beneficial effects on the areas of the body that connect to those zones.

In China, texts documenting the medical benefits of massage therapy date back to approximately 2700 BCE. The Chinese tradition of massage therapy was developed from the combined expertise and methods of doctors in traditional Chinese medicine, practitioners of martial arts, Buddhists and Taoists who viewed touch as essential to their spiritual yoga training, and laymen who offered massages for relaxation.

Chinese massage methods originated from the principle that diseases and illnesses arise due to a deficiency or imbalance in the energy in specific pathways or meridians that represent physiological systems. Through massage and other specific bodywork techniques, energy will flow more harmoniously through these pathways, allowing the body to heal itself naturally.

Believed to be of divine origin and passed down orally through generations, Ayurveda is the traditional holistic medical system in India. Ancient seers and natural scientists developed this system based on centuries of studies, experiments and meditations.

Wellness......Home Delivered
Texts detailing Ayurvedic principles and practices were written some time between 1500 and 500 BCE. Based on these texts, Ayurveda was widely adopted throughout India and Southeast Asia.

Ayurveda views that individuals incur illnesses and diseases when they live out of harmony with their environment. To treat their conditions, individuals must restore their natural mental and physical balance by re establishing harmony between themselves and the world around them. At that point, they can begin to heal naturally.

Based on the patient's health imbalances, constitution and the time of year, Ayurveda recommends how to use the five senses to interact with the environment in order to create balance. Treatments in Ayurveda include diet and herbalism, aromatherapy, colour therapy, sound therapy and touch therapy.

Timeline
BC 722-481: Huangdi Neijing is composed during the Chinese Spring and Autumn period (the beginning of recorded history). The Nei-jing is a compilation of medical knowledge known up to that date, and is the foundation of Traditional Chinese Medicine.

BC 500 Jīvaka Komarabhācca, also known as Shivago Komarpaj, the founder of Traditional Thai massage (Nuad Boran) and Thai medicine. According to the Pāli Buddhist Canon, Jivaka was Buddha's physician. He codified a healing system that combines acupressure, reflexology, and assisted yoga postures.

Do you want to re-energise your body and relax your mind?

BC 493: A possible biblical reference documents daily "treatments" with oil of myrrh as a part of the beauty regimen of the wives of Xerxes (Esther, 2:12)

AD 1150: Evidence of massage abortion, involving the application of pressure to the pregnant abdomen, can be found in one of the bas reliefs decorating the temple of Angkor Wat in Cambodia.

AD 1776 Pehr Henrik Ling, a Swedish physical therapist, and teacher of medical-gymnastics is born. Ling has often been erroneously credited for having invented "Classic Massage" aka "Swedish Massage", and has been called the "Father of Massage

Hottest Photo Reports
Catch up with all the political quotes from our politicians.
Advertise here
More from Health
ModernGhana Links
Hiatal Hernia
How to Conquer Fear Of Surgery
Better Approach For Angiography And Angioplasty
TOP STORIES