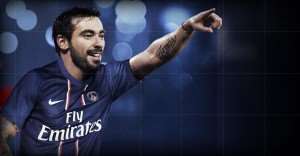 If Zlatan is the spearhead of the PSG in Ligue 1 (Championship) in Uefa Champions League, the trigger of Paris is called Ezequiel Lavezzi .

By equalizing against Valencia on Wednesday in the second round back in C1, the Argentina has increased his capital goal in the competition to 5.

This gives him already a good place in the history of Paris Saint-Gremain.

Indeed, “Speedy” Lavezzi is on the trail of the former PSG striker, George Weah on the European scene. “Mr. George” had scored seven times in his time in regular time in Cup with big ears.

The Parisian striker scored his five goals in the last four of the Champions League PSG. Besides his knee against Valencia goal in the 66th, he had struck against the Spanish club in the first leg by opening the scoring. Scorer of  the winner in the final group match against FC Porto (2-1), the former striker of Naples opened his counter against Dynamo Kiev in Ukraine, with a double (NDRL, 0-2 victory for PSG ).