Hollande gets hero's welcome in a Mali fearful of future 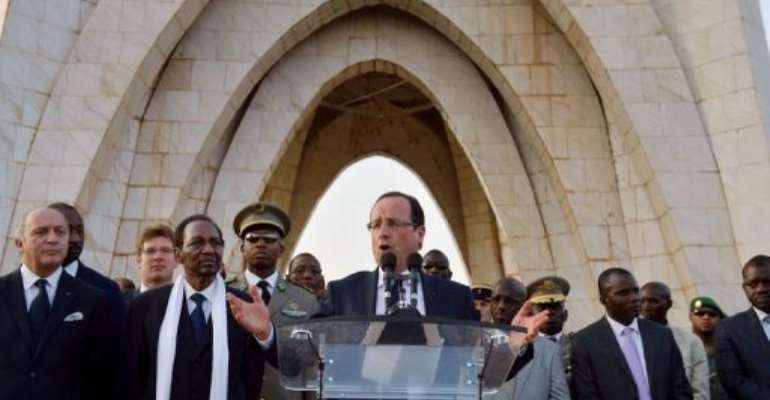 French President Francois Hollande (C) delivers a speech on February 2, 2013 on the Independance square in Bamako. By Eric Feferberg (AFP)

BAMAKO (AFP) - President Francois Hollande received a rapturous welcome in Mali on Saturday as he promised that France would stay as long as necessary to continue the fight against Islamist rebels in the country's north.

As troops worked to secure Kidal, the last bastion of radicals who occupied the vast desert north for 10 months before the French army's surprise intervention, Hollande told Malians it was time for Africans to take the lead but that France would not abandon them.

"Terrorism has been pushed back, it has been chased away, but it has not been defeated yet," said Hollande, whose decision to intervene in Mali three weeks ago won him accolades in the former French colony.

"France will stay by your side as long as necessary, as long as it takes for Africans themselves... to replace us," he told a large crowd in the capital, Bamako, at a monument commemorating Mali's independence from France.

Earlier, in the fabled city of Timbuktu, thousands gathered in the central square and danced to the beat of drums -- a forbidden activity during the extremists' occupation -- to welcome the French leader, with shouts of "Vive la France! Long Live Hollande!"

Mali's interim president Dioncounda Traore thanked his counterpart for the French troops' "efficiency", which he said had allowed the north to be freed from "barbarity and obscurantism".

Hollande was offered a young camel draped in a French flag as he toured the city.

"We must tell him that he has cut down the tree but still has to tear up its roots."

As they visited the site of two ancient saints' tombs that the extremists tore down with pickaxes in July, considering them idolatrous, Hollande told the mosque's imam: "There's a real desire to annihilate. There's nothing left."

"We're going to rebuild them, Mr President," said Irina Bokova, the head of UNESCO, which is trying to assess the scale of the damage to Mali's ancient heritage -- particularly in Timbuktu, a caravan town at the edge of the Sahara that rose to fame in the 14th century as a gold and salt trading hub.

With the rebels ousted from all major towns but Kidal, France is keen to hand over to nearly 8,000 African troops slowly being deployed, which the United Nations is considering turning into a formal UN peacekeeping force.

But there are warnings that Mali will need long-term help and fears that the Islamists will now wage a guerrilla campaign from the sparsely populated north.

The joy of citizens throwing off the yoke of brutal Islamist rule, under which they were denied music and television and threatened with whipping, amputation of limbs and even execution, has been accompanied by a grim backlash against light-skinned citizens seen as supporters of the extremists.

Rights groups have reported summary executions by both the Malian army and the Islamists.

Human Rights Watch said Friday that Malian troops had shot at least 13 suspected Islamist supporters in Sevare and dumped them into wells.

Mali's military was routed at the hands of rebel groups in the north, whose members are mostly light-skinned Tuaregs and Arabs, before the French army came to its aid.

With fears of reprisal attacks high, many Arabs and Tuaregs have fled.

In all, the crisis has caused some 377,000 people to flee their homes, including 150,000 who have sought refuge across Mali's borders, according to the United Nations.

Hollande called on all troops in Mali to show "exemplary" conduct and respect human rights -- an appeal echoed by the interim Malian president, who promised to lead a national reconciliation process and repeated that he wants to hold elections by July 31.

The French-led intervention has met little resistance, with many of the Islamists believed to have slipped into the desert hills around Kidal -- likely taking seven French hostages with them, officials say.

While largely supported by the French public, the operation has not yet paid domestic political dividends for Hollande, failing to reverse a steep slide in his approval ratings as the economy struggles.

US Vice President Joe Biden praised the French intervention, saying that dealing with extremists in north Africa and parts of the Middle East now required "a more integrated strategy" and use of the "full range of the tools at our disposal".

"That's why the United States applauds and stands with France and other partners in Mali, and why we are providing intelligence support, transportation for the French and African troops and refuelling capability for French aircraft," he told top military brass at a security conference in Munich.