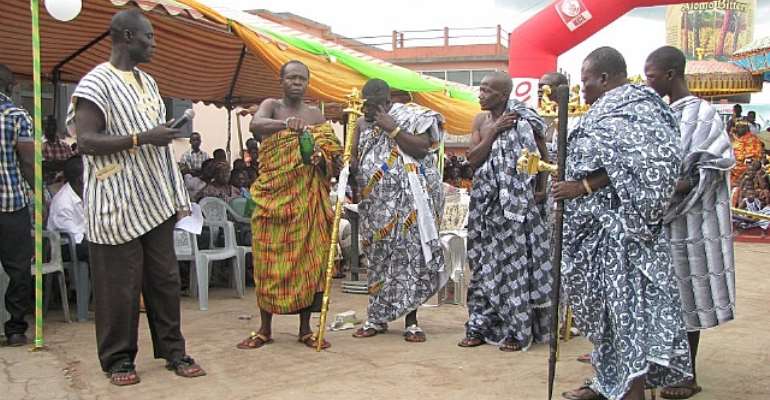 African Traditional Religion (ATR) today? Are you crazy? In this modern world, you want to follow Nana Kwaku Bonsam ( symbol of Ghana Akom today) and his “evil” followers? What is wrong with you?…….These and other equally emotional responses are some of the reactions one would get today when the subject of African Traditional Religion is brought up in any meaningful conversation about religion. For many a time, the responses are not complimentary at all but should our emotions and our faith affiliations take the worst part of us all the time and bar us from offering logical answers or learning more about what our great great ancestors practiced and the foundation on which they founded most of the communities in which we live today? Is ATR only about Akom, Possessions and all the so called "evil deeds" and hell destinations that we associate practitioners with? This article is an attempt to bring to readers, some of our research findings on the relevance of ATR today and the importance for believers of other faiths to be informed and to reflect deeply on how we condemn everything African and dehumanize our own very existence worthy of dignity. It is also to share with foreign and local missionaries or international workers who have pending duties or are already in some rural communities in Africa to be equipped with the cultural competence to enable them carry on their works successfully without any trouble or resistance from the local people.

An African Traditional Religious documentary on Ashanti Akom was filmed about the practices at Nana Bodwese Shrine and Clinic under the great Okomfo Nana Gyasi Obeng of Pensu. The film was commissioned by the Utah based premier christian University, The Bingham Young University. The question is why would a US top christian College be interested in researching about ATR in Ghana? In viewing the documentary film. a lot of interesting observations are made. Among them is the humanity in African Traditional Religion where the centre of the practice are humans and how to meet their needs wholistically. It also shows the dependence on a supreme power in almighty God whose blessings are released through the intermediaries who are ever presence and can be emotionally felt via the Akomfo or the mediums.

Vanessa D. Johnson, a researcher at the Northwestern University in the US made an interesting observation in her scholarly article published in the Journal of Black Studies. In the article titled Nguzo Saba as a foundation for African American College Student Development Theory, she posits that because many of the Colleges in America were founded on EuroAmerican Anglo Saxon values to educate middle class whites, thereby to reinforce those values and practices, these theories have proven unsuccessful in responding to educational and cultural needs of African American students. She argues that students affairs professionals should take a second look at black students in majority white institutions being still evaluated based on these Anglo-Saxon values and practices which leads many of the black students dehumanized? Is her observation not relevant to our discussion in this article? Should practitioners of other faiths condemn African cultural practices based on a country specific religious beliefs, values and practices?

Students of many christian seminaries around the world especially those in Ghana would tell you part of their elective courses are ATR and so the names Mbiti and Bishop Akwasi Sarpong's names are not strangers to any well trained Priest. Is it any out of place experience to see that graduates of these institutions who become priests are well endowed with the best knowledge therefore making some of their works in the community easier and successful?

Karibu Stenger, PhD, a German African Studies expert, professor in a Catholic University in Kenya and a priest for the German community and their parish in Kenya has an article on the subject under discussion worth sharing:

In the the article he begins with a special question:

“Why should missionaries whose aim is to bring the Good News be concerned with ATR?

Is it not their duty to convince the people to give up religious practices which are full of superstition, fear and witchcraft?

Indeed, in the beginning of missionary activity, due to many misconceptions and ignorance, ATR was considered as the direct opposite of Christianity, which needed to be eradicated. This was at a time when human societies judged from a Western perspective – which was the yardstick of normality – were divided in two types:

Western – Non-Western
Civilized – Primitive
Logical – Prelogical
Healthy – Sick, Evil, Savage.
Africans, therefore, were widely considered as people with inferior forms of religion and logic. The alleged cultural superiority of Europe led many missionaries not only to bring the Christian faith, but also Western culture, at the expense of local cultures and religious traditions.

ATR, on the other hand, is inseparably linked to African cultures and worldviews. That is why, due to the emphasis on inculturation of the Christian faith, the importance of ATR has been rediscovered. Even if, especially in East Africa, ATR practices are not very visible, it remains a fact, that the thinking of the people, especially in times of crises, especially death, is very much linked to ethnic culture and religious traditions. Without their knowledge a missionary is unable to understand their thinking.

ATR should not only be seen as “stepping stones” to Christianity, but should be appreciated as genuine experiences of the Divine. Only then should they be evaluated in the light of the Gospel.

It is my experience of the last five years that for many students of ATR a critical but positive approach to ATR is a liberating experience that serves as an indispensable tool for inculturation that strengthens African identity. The students also understand such an approach as recognition of their past history.

The traditional religions of Africa are human in the deepest sense, because they focus on people and their everyday problems. Earlier researchers and missionaries portrayed them often as primitive and barbaric and ridiculed them [I give many examples in my book: White Fathers in Colonial Central Africa - a Critical Examination of V.Y. Mudimbe's Theories on Missionary Discourse in Africa].

I, therefore, consider a positive approach to ATR also as an expression to say sorry for former insensitivities and to acknowledge earlier mistakes and misconceptions.”

Give EC The Peace Of Mind To Work – NPP Communicator Tells N...
30 minutes ago