THE CULTURAL AND SPIRITUAL IMPORTANCE OF OUR GHANAIAN NAMES 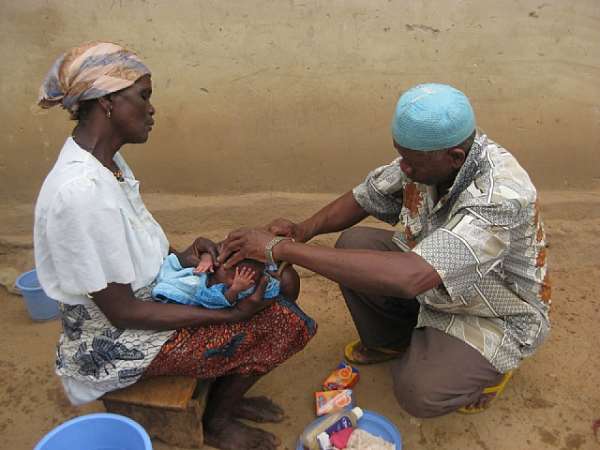 In our previous article, we shared with our readers a Facebook update of Begyedom Katakyie Adansi-Prekese of New York where the statement below highlighted the importance of names in Ghanaian culture.

"IN AKAN LANGUAGE, THE NAME bonsam MEANS THE DEVIL...... SO WHY WOULD A GOOD LOVING MOTHER NAME HER CHILD abonsam or bonsam?...........WHAT SIGNIFICANT DOES THIS AND OTHER AKAN NAMES HAVE IN GHANAIAN AKAN ANTHROPONOMY?

IS THERE ANOTHER AKAN
NAME THAT MEANS baakan?
WHAT DOES NYAMEKYE MEAN?
DUKU? WHO IS NAMED DUKU AND IN WHICH ORDER OF BIRTH DOES ONE GET SUCH A NAME?

MY FRIEND'S NAME IS densu......WHAT IS THE SOURCE OF THIS NAME?

In our article today we are continuing to share with our readers what are the cultural processes and protocol for naming Ghanaian Akan new born babies, what the names mean and what informs the choice of those names in a rigorous way to answer the above questions:

Naming Ceremony among the Akan:
The naming ceremony among the Akan is called Dzinto or Abadinto. Like the Ga and the Ewe, it is performed early in the morning on the eighth day.The person chosen to perform the rites should be of a good moral standard, the belief is that if he has low moral character by officiating at the rites, he can infect the baby with his bad energy. The father is usually represented by his sister.

The man performing the rites puts the child on his lap. He then asks for the child's name and announces it. Libation is poured during which he prays for prosperity for the child and furthermore asks that he should be blessed with many children.

He then dips his right forefinger into water and wets the child's lips with the water three times. He mentions the child's name each time saying, for example, “Opamfo Abbam, wose nsu a, nsu a” (Opamfo Abbam, when you say water, it must be water). He does the same with palm wine or schnapps and says, “Wose nsa a, nsa a” (When you say palm wine, it must be palm wine) and then adds, “Wose tuntum a tuntum, Wose fitaa a fitaa” (When you say it is black, it must be black, and if you say it is white, it must be white). The significance of the sayings is that the child should be truthful, or he should know the difference between good and evil.

The child and the mother are presented with gifts by the father (husband), relatives, and friends. The father's (husband's) gifts to the child are usually a bucket, a towel, soap, clothes, pomade, etc. The mother is given a cloth, a handkerchief, jewelry, sandals, etc., by the father (husband). This presentation is known as Tanfi (in Akan). The person after whom the child is named also presents gifts to him, e.g., gold ring and money.

The Akan have various ways of giving a name to a child. Before the eighth day, the child is given the name of the day on which he was born. This becomes his first name. For example, if he was born on a Friday, he will be called Kofi, if a boy and Afua, if a girl. All such names have by-names. The by-name for Friday born, for example, is Akyin or Kyin and so the child can be called Kofi Akyin or Kofi Kyin or Afua Kyin or Afua Akyinba. The Fantes have Ebow as a by-name for Tuesday born. Therefore, we have Kobena Ebow.

On the day of the naming ceremony, the child is named after his father's relative or someone the father wants to honor, for example, his father-in-law or mother-in-law. Most Akan names have their masculine and feminine forms, e.g., Ansa for a boy and Ansaa for a girl, Owusu/Owusuaa, Esar/Essaba, etc.

A child who is born in answer to a request made to a shrine or deity is named after that shrine or deity. We have examples of such names as 'Tano,' 'Densu,' 'Afram,' 'Pra,'"Gyebi" Adade", "Kompa", "Aminsa", "Krum" etc

Some names depict the circumstances in which a child is born, e.g., Antobam or Anto is for a child whose father died before he was born. Afriyie is for one born at a good time. Others show the festive occasions on which they were born, e.g., Adae (Adae festival), Fordwoo (Fordwoo festival), Bronya (Christmas day).

The Akan child can have different names. These include names which are given to children who die and reincarnate. Such names are known as Apentedin or Okobae (go and return). Such names which refer to filthy or nasty things are believed to prevent such children from dying. Examples are: Sumina (incinerator), Odonko (marked face). Cuts are made on the faces of such children.

Furthermore, the Akan have names for the order in which children are born. Here are examples:

Ceremonies for Twins:
Among some Ghanaian communities the birth of twins is greeted with great joy and satisfaction. Twins are believed to have special powers and bring good luck to their parents. Special rites and ceremonies are, therefore, performed for them.

The word Haadzii means twins in Ga. It is believed that each set of twins has a partner spirit. Therefore, a special shrine is made for the Haadzii as soon as they are born. In this shrine is a pair of bush cow horns. Haadzii yele yeli is an annual yam festival for twins.

The elder of twins of different sexes is called Oko or Akwete for a male and Akwele for a female. In the case of female twins, the elder is called Akwele while the younger is called Akuoko. A child born after twins is called Tawia, next after him is Ago, and the next is called Abam.

The Akans call twins Ntaa/Ntafo. As soon as they are born, strings of red and yellow beads and cowries are tied on their wrists. This is called Abam. Like the Ga, Fridays are sacred days for the Ntafo (twins). On these days special ceremonies known as Abam are performed for them. They are given a ritual bath.

Before the special ritual bath takes place, another Abam is set up. This consists of a calabash with water and white clay, red and yellow beads, cowries, gold dust, and herbs called Adwira or Odwen haban. It is covered with a piece of calico. This Abam is used on Fridays and at the beginning of new harvests. The Friday ceremonies and the ritual bath are also known as Abam.

Police requests CCTV footage of murder of wife of GNPC boss'...
11 hours ago