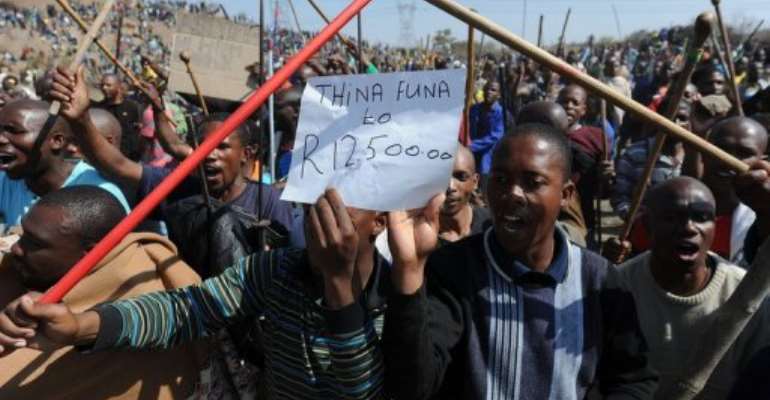 Miners demonstrate near Rustenberg on August 16. By - (AFP)

MARIKANA, South Africa (AFP) - Police on Thursday fired tear gas and rubber bullets at workers on an illegal strike at a platinum mine where 10 people have been killed in clashes between rival unions over the last week.

Hundreds of workers armed with sticks and metal rods had gathered on a hillside near the mine, defying police orders to disperse.

Several people were lying on the ground, some bleeding from wounds, after the crowd fled, according to an AFP reporter.

Police spokesman Lindela Mashego could not confirm the extent of the injuries.

"There's nothing to say until we find out on the scene what happened," he told AFP.

Helicopters hovered overhead as police moved toward the workers, carrying rifles and wearing bulletproof vests. Other police rode on horseback, while residents of a nearby township watched the crackdown from a distance.

Ten people have died since the illegal strike began last Friday at the Lonmin platinum mine, where rival unions are battling for influence.