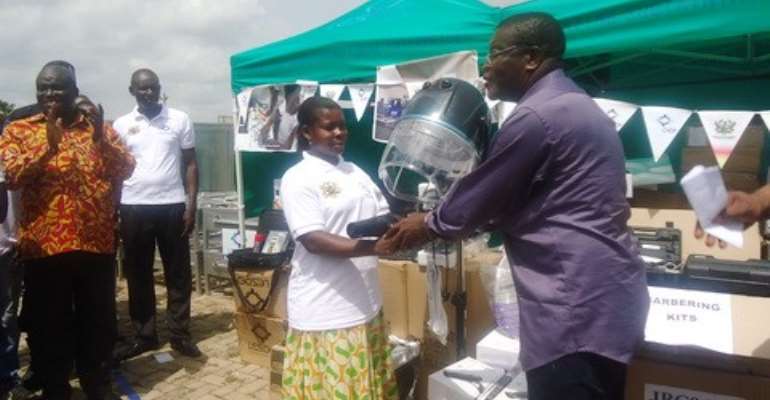 Mr. Elvis Afriyie-Ankrah, the Deputy Minister of Local Government and Rural Development, has asked Ghanaians to take advantage of government's investment in the Local Enterprises and Skill Development (LESDEP) Programme to ensure that employment issues are reduced in the country.

Speaking at a graduation and presentation of business start-up equipment to 600 beneficiaries of the programme in the Brong-Ahafo Region at the Jubilee Park in Sunyani, Mr Afriyie noted that the making of one successful entrepreneur will lead to the creation of many direct and indirect jobs in the various communities.

The graduates were each presented with equipments and tools relating to the various training modules and they included barbering kits, gas oven and stove, dump trucks, tricycles, mobile phone repair kits and sales vans.

Mr. Afriyie-Ankrah said 20,000 unemployed youth had so far been trained under the programme and expressed the hope the number would increase to 40,000 by the end of the year.

He appealed to the graduates who had completed apprenticeship under master trainers in the region, to regard themselves as “beacons of hope” for other youth.

He reiterated that the harnessing of the latent entrepreneurial ideas of our people is the sure catalyst to launching Ghana's economic growth. He urged them to work hard and lead meaningful lives worth emulating so they could also train others to become skilled and self-employed.

Mr. Eric Opoku, Deputy Brong-Ahafo Regional Minister, said under LESDEP, most unemployed youths have been trained and set up, and this will go a long way to assist other family members who are dependent on the beneficiaries.

He said the Brong –Ahafo Region is one of the birthplaces of great entrepreneurs in Ghana and believed LESDEP will assist to unearth and build more entrepreneurs who have great business ideas to accelerate the growth of the Region and that of Ghana as a whole.

Mr. Kwasi Oppong-Ababio, Sunyani Municipal Chief Executive, said beneficiaries from 10 out of the 22 districts/municipalities in the region were among the 600 graduating apprentices and appealed for many more people to be brought on board.

Mr. Adem Gariba, national coordinator of LESDEP, said thousands of youth had so far registered to be trained under the programme, saying those yet to be trained should not lose hope as they would soon have their turn.