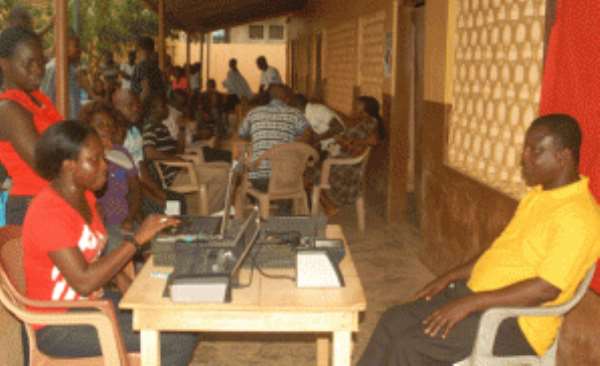 Eighteen out of the 96 Biometric Registration Machines allocated to the Tema Metropolis are out of order, Mr. Gabriel Manu, Tema Metropolitan Electoral Officer, has disclosed.

Consequently, he said, those machines had been sent to the Greater Accra Regional Office of the Electoral Commission, while 16 extra registration kits have been recalled and made available to densely populated areas to augment the shortage.

He explained that the recall of those 16 kits now leaves those centres with one machine each, while two other registration centres in the Metropolis were currently without machines.

He said during the first phase of registration, a provisional number of 105,028 eligible voters registered in the Metropolis, out of which 21,744 were from the Kpone-Katamanso Constituency, with a total of 83,284 in the Tema East and Tema West constituencies.

Mr. Manu also said during the first phase, a total of 40 challenge cases were recorded across the centres.

The challenge cases, he noted, included cases of suspected under-age registrants, foreigners and people residing outside the coverage area of the registration centres.

He reminded the public, especially political party representatives at the various registration centres that they cannot prevent anybody from registering based on suspicion.

He said the challenge forms must be used to question suspected foreigners, minors, and any other person, instead of physically restraining suspects from registering.

Mr Manu said some of the political party agents had misunderstanding with some of the Registration Officers when the officers insisted that the right procedure was followed in such cases.

He assured the public and political parties that a Registration Review Committee would sit and investigate all reported cases after the entire registration exercise.