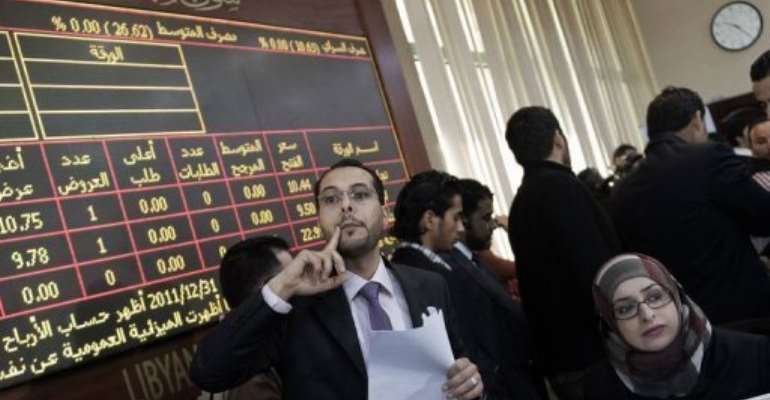 Brokers work during the official reopening of the Libyan stock market in Tripoli Thursday. By Gianluigi Guercia (AFP)

TRIPOLI (AFP) - Libya's stock market opened on Thursday for the first time since the fall of Moamer Kadhafi with trading in 10 companies valued at $3.1 billion (2.4 billion euros), its general manager said.

"We open trading in 10 companies with a capital value of 3.9 billion Libyan dinars," Ahmed Karoud told AFP ahead of the opening ceremony which drew government officials and potential buyers.

It is a modest but significant step for the North African nation which is seeking to relaunch its economy after decades of dictatorship that stifled private companies and subjected banks to the whims of Kadhafi and his clan.

"Foreign investors will be able to own up to 10 percent of shares," Mohammed Fakroun told AFP, adding that the mechanics of that would be ironed out by the central bank very soon.

Most of the shares being traded represent the financial sector, including private banks and insurance firms, although a cement company also made the cut in the country which places reconstruction high on its agenda.

An Islamic fund and a real estate company would start trading in June, Karoud added, with oil companies and telecommunications giants Al-Madar and Libyana next in line.

"Before February 17 there was no rule of law," Karoud said in reference to the start date of the revolt that plunged the country into a civil conflict that ended with the toppling and killing of Kadhafi in October.

The Mediterranean state, he said, hopes to become the main financial link between Europe and the rest of Africa. Its stock market was modelled on Abu Dhabi's and has ambitions of expanding, he added.

"We still don't have a government but we have the capacity and infrastructure necessary to become the financial hub of North Africa," he said predicting a new chapter of foreign investment, innovation and development.

Karoud said a pro-Kadhafi brigade seized the former stock market building in June last year simply because it took a fancy to its location.

Employees had to evacuate documents and backups in their private cars, he said.

"This opening sends a sign to the world that Libya is now a stable country where the economy is kicking off again," he said, adding that investors can expect huge returns in the coming years.

The bourse's chairman was also keen to stress the country's transformation.

"Libya is safe again and thinking of its people and economy," Fakroun said.

All companies traded would enjoy a five-year tax break in a bid to boost trading, he said.

The Libyan Stock Market is also opening a branch in the second city of Benghazi, allowing buyers in the east and west to make purchases, and hopes to set up an electronic trading facility in the coming months.

"We are re-opening the stock market with a new vision of technology to reach investors across the world and push the wheel of the economy forward," said information technology manager Ahmed Balras-Ali.