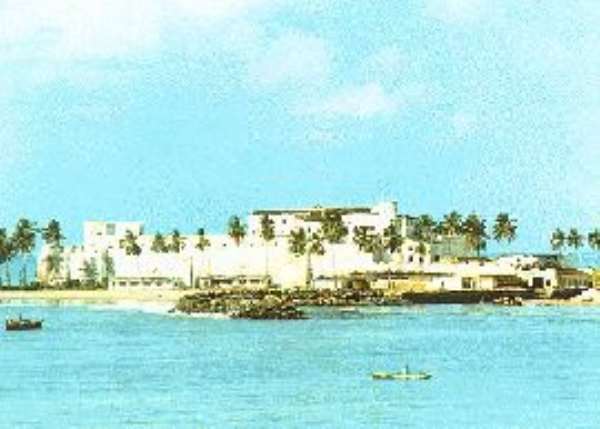 Elmina, July 26, GNA- The Pan-African-Historical-Theatre-Festival (PANAFEST 2003), took off with a colourful 'Akwaaba' ceremony at the forecourt of the Elmina Castle on Saturday, soon after some of the foreign participants, mainly African-Americans, who had undertaken a symbolic cruise on canoes from Cape Coast to the Elmina Castle arrived. They described the one and a half-hour sail, dubbed "the return ceremony," which began at about 10 00 hours from the gates of the dungeons of the Cape Coast Castle, as "smooth and enjoyable."

Before they set sail, Reverend Dr. Franklin Richardson of the Grace Baptist Church in New York, had prayed for God's guidance for a safe sail, while Opanyin Kobina Ebumfi, a linguist for the fishing community, also offered libation.

Nana Kodwo Eduakwa VI, Akwamuhene of Edina traditional area, received them on arrival at the shores of the Elmina Castle, with the District Chief Executive, Nana Ato Arthur and the Presiding Member, Mr. Frank Appiah amidst the pouring of libation and fontonfrom drum beat. Nana Kodwo Condua VI, Omanhene of Edina traditional area and his elders, who were clad in traditional mourning colours of red and black, to portray the solemnity of the occasion, welcomed them in turns at the forecourt of the Castle for the ceremony.

They were served with 'oto' (mashed yam and boiled eggs) as a welcoming traditional meal, and were entertained to traditional drumming and dancing, such as the 'kete' and 'Asafo' as some of them joined in the dancing.

Among the cultural groups, which performed were the Elmina Dance Ensemble, and Ashanti Dance Theatre also based in Elmina.

Speaking at the ceremony, Dr. James Small, leader of the 'Pilgrimage Home Comers' from the United States, cautioned Africans and people of African descent, to stay focused, " because the people who enslaved Africans were still working to re-enslave them and were always hoping to see to it that Africans remained downtrodden.

He said what Africa needed most, was economic development and not slavery, stressing that Africa needed the opportunity to use her expertise to develop and urged Africans to unite and fight all forms of slavery.

Dr. Small, said America had within the last year, spent 600 billion dollars on her enemies and declared that if that money had been directed into Africa, "it would have been a major turn around" for the development of the continent.

Rev. Richardson urged Africans to disassociate themselves from drug peddling because of their destructive effects on human life. They should also intensify the campaign on educating the people on the dangers of the HIV/AIDS disease, adding; "We have the capability of ridding our communities of drugs and diseases."

Dr. Leonard Jeffries, lecturer at the African Studies Department of the City College in New York, paid glowing tribute to Yaa Asantewaa, Kwame Nkrumah and other heroes and heroines who fought against slavery and also lifted the torch of Pan-Africanism.

Nana Conduah appealed for peace and unity among his people to attract investors to the area and pledged to release land to investors who would express interest in investing in any project in the area.