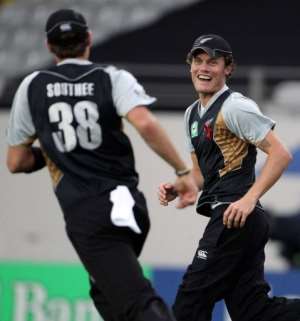 AUCKLAND (AFP) - A Rob Nicol-inspired New Zealand held South Africa to seven for 165 in the third Twenty20 international on Wednesday to set themselves a modest run chase in the series decider.

Nicol snared two wickets for 20, took two catches and was involved in a run out as the Black Caps restricted South Africa to just 56 runs in the final eight overs, while Tim Southee also contributed two for 22.

JP Duminy top scored for the tourists on 38 during the match at Eden Park and there were contributions from Hashim Amla (33) and AB de Villiers (29).

But the Proteas never fired and needed a 22-run cameo from tail-ender Wayne Parnell to add some respectability to the scoreline.

New Zealand's top priority early in the innings was to defuse the threat from opener Richard Levi, fresh from a record-breaking unbeaten 117 in the second match, in which he smashed 13 sixes and scored a 45-ball century.

The dangerman helped himself to one six from Michael Bates but was dismissed for 11 trying for a second off the next ball, failing to get enough power onto his shot and sending the ball sailing to Nicol.

Nicol's fielding again proved invaluable two overs later, when he ran in from the boundary to catch Albie Morkel for 10 off Southee's bowling, although his teammate Martin Guptill missed a chance and dropped Amla on 29.

The mistake did not prove too costly though, with Amla out for 33 after edging Doug Bracewell's first ball to wicketkeeper Brendon McCullum.

With South Africa looking wobbly at 59 for three, de Villiers and Duminy steadied the innings with 62-run partnership before Nicol struck again to dismiss a desperately unlucky Duminy.

De Villiers prodded one of Nicol's medium pacers back down the wicket, only for the bowler to pick it up, spot Duminy backing up too far outside his crease at the non-striker's end and whip off the bails.

Nicol then clean-bowled de Villiers for 29 in the first ball of his next over and dismissed the hapless Justin Ontong two balls later, when the batsman shaped up for a lusty hit to dispatch a dipping ball to the boundary.

Instead it all went horribly wrong as the flight of the ball deceived Ontong and he lost his grip on the bat, sending it looping down leg-side as the umpire signalled lbw.

Guptill reedemed himself in the field with an athletic overhead catch to dismiss Johan Botha, leaving Parnell to boost the run rate with 22 off 17 balls.