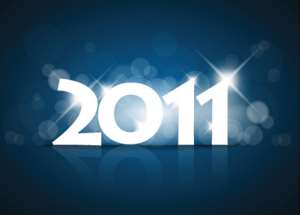 There isn't much tying these farewells together. Bin Laden, who was killed by U.S. Navy SEALS in Pakistan in May, died of what might be described as unnatural but unsurprising causes. Kim, meanwhile, died of a heart attack in the third week December but had been in failing health after a stroke several years ago. Both men could have died at any point in the past several years — 2011 just happened to be their time.

The Arab leaders, by contrast, all lost their positions (or lives) on account of unique political circumstances. They were turned out by their own citizens in a sort of intifada, a casting off, wrought by collective humiliation and frustration linked to a lack of political voice and economic opportunity.

It was not so much about a lone Tunisian fruit seller whose suicide launched a regional revolt or about social media as an organizational tool for revolution. The honest answer is that historical change occurs when sparks come into contact with kindling. World War I would have erupted absent the assassination of the Archduke Ferdinand, and the Vietnam War would no doubt have started absent an incident in the Gulf of Tonkin. Any spark will do when there is enough dry wood. After decades of misrule, the Middle East was ripe for change.

The more relevant question is less "Why did it happen?" than "So what?" What difference will all these departures make? Looking back, 2011 was a year of great transition — but not of transformation.

In the case of Bin Laden, the answer is that not much will change. Even before he was killed, the al-Qaeda leader had been overtaken by events. Those gathering in the public squares of Cairo and other Middle Eastern cities were not inspired by him or his terrorism organization. He was a destroyer, not a creator, his death more milestone than turning point. Nihilism is not the stuff of legacy.

The decentralization that characterizes today's terrorism means that, beyond Bin Laden, others will carry on the funding, planning and execution of terrorist acts for years and possibly decades to come — or until terrorism loses its legitimacy and governments and societies stop supporting it and tolerating it.

Kim leaves behind an anachronistic Stalinist state. In the short run, it is unclear whether his son will be able to consolidate power — or whether he will resort to violence against South Korea in an effort to do so. If he does, he will be taking an enormous risk, as it is all but certain that South Korea would retaliate militarily.

The bigger question is the fate of North Korea. The country is a relic with an army and nuclear weapons and little else other than a long-suffering population. China, a critical source of fuel and food, as well as the gateway for much of North Korea's trade, will be the key factor that determines the country's future. China fears that instability in the North could lead to a flood of refugees into China and conflict on the peninsula. Even more, Chinese leaders fear the unification of Korea under the control of Seoul and within the U.S. security orbit. So they are likely to continue to prop up North Korea even while encouraging restraint and a degree of economic reform.

And what of those Arab countries that have rid themselves of their authoritarian rulers? It would help here to jettison the phrase "Arab Spring." Spring is a three-month-long season of renewal, but what is going on in the Arab world probably will require decades to unfold, and it is far from inevitable that what comes will be welcome.

As difficult as it can be to oust a repressive regime, it is far harder to put something better and enduring in its place. History is replete with deposed leaders whose immediate or ultimate successors were as bad or worse. The Soviets who succeeded the czars come to mind; so, too, do the ayatollahs who came after the shah in Iran. For all the flaws of the ousted, it is hard if not impossible to argue that the alternative left the country's citizens or neighbors better off.

Iraq's experience also suggests caution. Saddam Hussein's overthrow led to sectarianism and civil war. Things have calmed, but Iraq's future remains up in the air. In no way is it assured that the country will become normal. Just as easy to imagine are renewed sectarian strife, authoritarian rule, or simply a dysfunctional country characterized by sporadic violence and a weak central government.

We don't know if this will happen in those Middle Eastern countries that finally overthrew their longtime rulers in 2011. Tunisia has carried out relatively fair and peaceful parliamentary elections with a strong showing by Islamist parties; how they will rule is unclear. Libya has the challenge of building national institutions where none existed. Complicating the future are tribal frictions and the availability of weapons; making prospects more promising is the potential for oil revenue.

Egypt will be the most important test. It is home to more than a quarter of the Arab world and serves as a model that Sunnis everywhere look to. Right now it is clear that Islamists of various stripes will dominate its politics, even as the military is reluctant to relinquish its power or privilege. The young liberals who helped start the political upheavals have little sway. The economy is deteriorating rapidly, given the loss of tourism and investment along with the continuing unrest.

Certainly, democracy for the region is a worthy goal. But outsiders would be wise to place at least as much emphasis on protecting and establishing the prerequisites of democracy — the rule of law, a constitution with true checks and balances, robust civil society, open markets — as they do on elections. The U.S. government should make clear what a close relationship with Washington requires in the realm of foreign policy, including the necessity that any new government actively oppose terrorism and demonstrate a willingness to live in peace with Israel. U.S. officials and observers should underscore these priorities and not hold back criticism when justified; aid should be made conditional on implementing and then respecting specific political and economic reforms.

All of which argues for keeping the champagne on ice. A future of continued global terrorism; a closed and militarist North Korea; and an intolerant, illiberal Middle East could still materialize — and would be all too familiar. Alternatively, the future could turn out to be both different and better, but it will take more than a change at the top to make that happen.