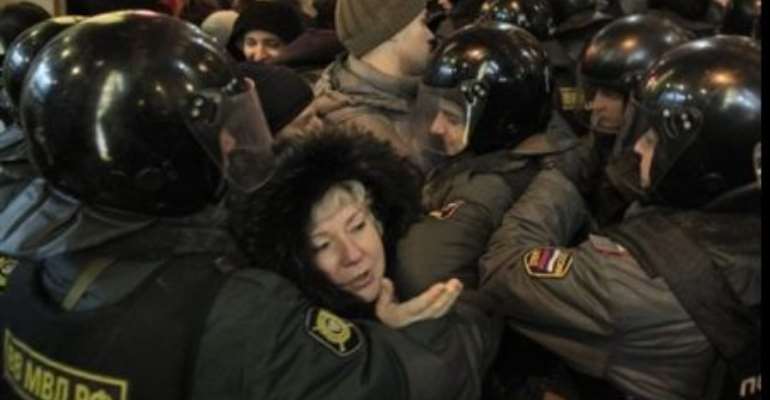 Dear President of the Russian Federation,
I strongly condemn the pressure exercised on the NGOs, human rights defenders and peaceful protesters who denounced electoral irregularities and called for fair, free and independent electoral processes following the elections results on December 4, 2011, as well as the defamation campaign targeting the Golos, an NGO working on election monitoring, ahead of the election.

Golos (“the Voice”), a major Russian NGO specialising in election monitoring has been the target of a State-organised harassment and a defamation campaign since November 26, 2011. The harassment started a week before the holding of the elections when a State-controlled media, the pro-Government newspaper Rossiiskaya Gazeta, published an article dated November 26, criticising Golos and accusing them of “reducing the process of observing the electoral campaign and voting on election day into a way of making money”.

Later, on December 2, 2011, the State-controlled TV channel NTV entered Golos headquarters to question the staff with cameras in order to broadcast in the evening a half-hour documentary containing sharp criticism of the NGO. In line with the Prime Minister Vladimir Putin's statement of November 27, the broadcast alluded that Golos had been a “recipient of grants” following “instructions of foreign governments”, and that the NGO's executives were handling millions of dollars in cash, in an attempt to discredit them. Vladimir Putin had accused the “representatives of some foreign countries” to pay money to influence the elections and accused western-granted associations to make a “wasted effort” as “Juda [was] not considered the most respected biblical character” in Russia.

This defamation campaign was doubled by acts of judicial harassment. On December 2, Golos was summonsed to appear before an administrative court, following a complaint filed by the Head of Russia's Central Electoral Commission, Mr. Vladimir Churov. On the basis of a vaguely-worded law that prohibits the publication of any poll data over a period of five days before the election day, Golos was fined 30,000 rubles (approximately 720 euros) for having published on the Internet a digital map reporting pre-electoral irregularities – based on complaints reported by 5,300 citizens, known as the “map of violations”.

On December 3, Golos' Director, Ms. Lydia Shibanova, was retained during 12 hours at the Sheremetevo International Airport by the customs as she was returning from a trip abroad. Her laptop was confiscated for “examination” purposes by the customs officials, who denied her the right to contact her attorney. On December 4, in the early morning of election day, Golos' website crashed, together with others, due to a massive cyber attack targeting different independent media outlets, including Echo of Moscow, Bolshoi Gorod, The New Times, Slon.Ru.Zaks.Ru, LiveJournal and the Russian News Agency. Ms. Lydia Shibanova's email account was hacked as well as that of her Deputy's. As the polling places opened, many Golos electoral monitors were prevented from entering the polling places and were subjected to acts of threat and intimidation by polling officers. Their mobile phones were also cut off.

Moreover, since December 5, 2011, massive acts of harassment, including violent actions, have taken place in Moscow, Saint-Petersburg and in other Russian towns against peaceful demonstrators and a number of human rights defenders who had gathered to denounce irregularities surrounding the electoral process. On December 5, according to the Internal Affairs Ministry, around 300 protesters were detained in Moscow and even more in Saint Petersburg. Some were tried and remain detained as of today, while others were subsequently released.

On December 6, still in Moscow, almost 600 protesters were violently arrested, with a disproportionate use of force, for taking part in the demonstrations, including Mr. Oleg Orlov, Chairman of the Executive Board of Memorial, and Mr. Lev Ponomarev, Executive Director of the All Russia Public Movement "For Human Rights", were arrested and released soon after.

On the same day, 246 protesters were arrested in Saint Petersburg. They were violently repressed by the police forces who used batons to disperse the demonstrators in Triumphalnaya square. Some were beaten on the spot while others in police vans or in police stations. Those wounded were denied the right to medical assistance. Some of them were released without charges. Some demonstrators remained in custody awaiting court hearings, where tens of them, including some key figures of the opposition, were or are being sentenced to up to 15 days of administrative arrest. Others were sentenced to pay fines.

Ms. Elena Popova, from the organisation “Soldiers' mothers of Saint-Petersburg”, was also arrested on December 6 in the evening in front of the Grostiny Dvor, where protests have been taking place. She spent the night at the police station and was charged under Articles 19.3 ("disobedience to the police") and 20.2 ("violation of the regulations on gatherings, rallies, picketing") of the Administrative Code. She is still awaiting trial, which has been adjourned to December 19.

Moreover, Mr. Philip Kostenko, a member of the Anti-Discrimination Centre “Memorial”, was arrested on December 6. On December 7, he was sentenced to the maximum sentence of 15 days of administrative detention. He was accused of “disobeying the orders of the police officers” and of “refusal to put an end to his participation in the rally”. On December 10, the appeal lodged by his lawyer was rejected. On December 12, his lawyer lodged a complaint before the European Court of Human Rights (ECHR), as both decisions (of December 7 and of December 10) were issued following grave violations of proceedings. Mr. Kostenko is currently detained in the special detention centre of "Zakharievskaya" street, where he started a hunger strike on December 6, then joined by another detainee, in order to protest against their arbitrary detentions and inhumane conditions of detention and to urge the release of all protesters detained. Today marks the 7th day of Mr. Kostenko's hunger strike and I am concerned about his health status.

In other Russian towns, human rights defenders taking part in demonstrations were also arrested and harassed.

I have noted that some massive demonstrations were allowed on December 10-11, 2011, it expresses its deep concern about the above-mentioned attempts to hinder the peaceful activities of human rights defenders, in particular their freedom of assembly, and calls upon the Russian authorities to put an end to arbitrary arrests and judicial harassment and release all demonstrators. I further urges to you to end resorting to any form of administrative detention in relation to freedom of assembly, to guarantee in all circumstances their physical and psychological integrity, as well as to put an end to all acts of harassment against Golos as well as against all human rights defenders in the Russian Federation, and ensure in all circumstances that they are able to carry out their legitimate activities without any hindrance and fear of reprisals, in line with the United Nations Declaration on Human Rights Defenders adopted by the General Assembly on December 9, 1998.

I express our sincere hope that you will take these considerations and requests into account.