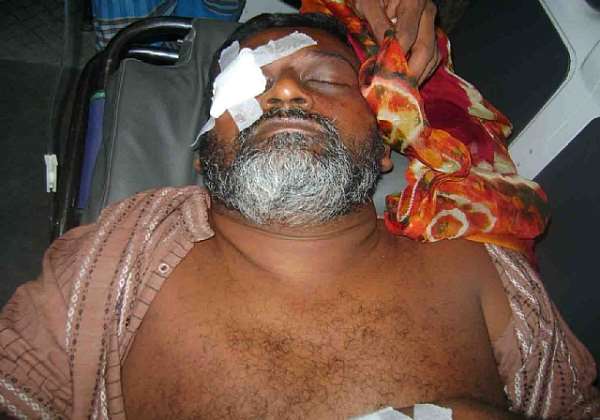 Rights Development Centre (HRDC) and Editor of the Pakkhik Gonomichhil

(Fortnightly Mass Procession, a vernacular newspaper), based in

Paikgachha of Khulna district, has been struggling for life at private

medical hospital in Dhaka now. Mr. Razzak was abducted by around 20

people led by Mr. Kazal Sarder, who is a brother of Bangladesh Army

Major Mustafizur Rahman Bokul, from Paikgachha town. At around 10:30PM

Terminal of Paikgachha where he, accompanied by his younger brother

shop for buying medicine.
On 29 April at around 10:30pm a group of armed men led by Mr. Kazal

Razzak from the Dhaka Bus Stand of Paikgachha along with Razzak's

younger brother and brother-in-law. The abductors put the three

Mustafizur Rahman's parent's house. There Razzak and his brother

instructions by the army officer, Major Bokul and the

Officer-in-Charge (OC) Enamul Haque of the Paikgachha police. Both -

Razzak and torture him until death. Razzak, who was initially declared

“dead” by Paikgachha hospital doctors, and his brother were denied

adequate medical treatment in the hospitals in Khulna due to

tremendous pressures from the military officers. Razzak and Bodiar are

struggling for life in critical conditions.
The abductors forcibly put Razzak and two other persons to a Nosimon

(a locally made vehicle of shallow pump engine) beating randomly. On

sharp weapons. The perpetrators pushed fingers into Razzak eyes that

started seriously bleed. The right hand and leg of Razzak have been

fractured in several places. He has sustained sever injuries all over

his body.
Meanwhile, when the family received information from the pedestrians

abducted by a group of people, they looked for them in probable nearby

expressed their ignorance about the alleged incident to the relatives.

One of Razzak's relatives called the Additional Superintendent of

Police of Khulna district seeking immediate action by the police.

Then, a team of police led by Sub Inspector (SI) Nurul Islam, who is

the Second Officer of the Paikgachha police, comprising SI Delwar

village toward which direction the abductors drove their vehicle,

according to the eyewitnesses. But, the police team was seen stopped

their motorbikes at Godaipur Natun Bazar instead of searching the

whereabouts of Razzak. One of Razzak's relatives drove a motorbike

toward the house of Major Mustafizur Rahman Bokul in Godaipur village

under the jurisdiction of the Paikgachha police station and from

moved to the scene.
The police and eyewitnesses found Razzak unconscious next to the

houses of Army Major Mustafizur Rahman Bokul and his next door

Razzak in order to confirm his death. His bother Bodiar was also being

beaten in brutal method. The police did not arrest any of the

perpetrators from the scene. They (police) put Razzak's unconscious

body and Bodiar, who was critically injured, onto the same vehicle,

which was used by the perpetrators at the time of abduction. The

police brought them to the Paikgachha Upazilla Health Complex (local

almost gauged out while he was bleeding from the eyes. His right leg

and hand were fractured in several places. The whole body had injuries

with marks of cut, bruise and swollen wounds.
The on duty medical officer of the Paikgachha hospital, who primarily

examined Razzak did not find his pulse, told the relatives that the

“patient had died already”. After receiving the information about

more”. Meanwhile, the leaders of the journalist community came to the

hospital and insisted the doctors to examine Razzak consistently to

confirm Razzak's life and death status. The doctors then re-examined

Razzak for around 40 minutes and finally found Razzak was alive. They

forearm is broken while the whole body is marked with serious

injuries. The Paikgachha hospital, which me incapable of providing

Hospital (KMCH).
As the news of Razzak's survival spread among people the perpetrators

carrying various types of weapons came to the Paikgachha hospital to

an ambulance for the KMCH. The inhabitants of the neighbourhood of the

hospital attempted to catch the perpetrators. Then, the police

prevented the people giving ways to the perpetrators to escape.

specialised treatment to Razzak and referred to the Dhaka Medical

College Hospital (DMCH), the largest public hospital of the country,

for treatment. The doctors told the relatives that if Razzak's eyes

are not adequately and immediately treated within 24 hours since time

of gauging the eyes he (Razzak) will permanently lose his eye sight.

order to avoid permanent physical disability. Razzak returned to his

sense but could not see anything.
Razzak told the Srilanka Guardian that Major Mustafizur Rahman

Bokul's brother Kazal Sarder and their allies abducted him from the

Dhaka Bus Stand of Paikgachha. He was taken to an open field next to

Bokul's parent's house. Everyone of Major Bakul's family including his

asked, “the son of a bitch is brought to our house; what shall we do

to him?” The mobile phone's conversation was made handset free at that

time. Major Bokul instructed to his relatives from the other end,

“Take off his eyes and kill him!” The perpetrators then pushed

screwdrivers into both of the eyes of Razzak and stirred the

screwdrivers around the eyeballs. Razzak immediately became unable to

see anything. Kazal Sarder also called the Officer-in-Charge (OC) of

the Paikgachha police station told him that they want to gauge

Razzak's eyes in another handset free conversation. In reply the OC

told, “First make sure that the eyes of the son of pig are taken out.

Then, confirm me!” Razzak felt that he was being beaten with rod and

stick until he lost his sense.
Razzak's brother Bodiar told that he heard the OC's conversation while

(to the crime scene) until you finish him (Razzak).” “When the police

(Sub Inspector of police are locally called “Daroga”) told his other

colleagues to through him beside the road from the vehicle (indicating

present in the torture of Razzak. Shafik told the fellow perpetrators

not to hand over Razzak to the police, who may be compelled by local

people to arrange medical treatment for Razzak. Instead, he suggested

to handover Razzak to the Rapid Action Battalion (RAB), which will

of crossfire.
The journalists of Khulna allege that the KMCH doctors have been

influenced by Major Bokul and other military officers. As a result,

avoided providing necessary treatment to Razzak. They have reasoned

army officers the perpetrators of the military service dominate the

whole hospital administration and medical cares whenever the officers

of the armed forces wish to do. The relatives of Razzak and

journalists seriously fear that in the DMCH, which is also headed by a

Brigadier of Bangladesh Army, Razzak may be denied necessary medical

treatment due to the interference by the military officers.

At 9:45AM Razzak was brought to the DMCH for treatment. Since then a

large number of plain clothed officers of the intelligence agencies,

who belong to the armed forces, have cordoned the hospital where no

treatment is being given to Razzak and his brother. Doctors are barred

the armed forces. Razzak is left on the floor of the Radiology Unit of

the DMCH.
Razzak was shifted to the capital's Trauma Centre early Saturday as

his condition deteriorated.
Police said the injured journalist had locked into a quarrel with some

of his relatives and in-laws over possession of a land in Paikgacha.

Major Mustafizur Rahman Bokul, who claimed to be a nephew of Razzak,

said to Srilanka guardian that, “Locals beat Razzak, as he went to

Rapporteurs on Situation of Human Rights Defenders and on Torture and

Other Cruel, Inhuman or Degrading Treatment or Punishment calling for

their immediate intervention into this matter.
Local human rights organizations and journalist protested about the

brutal attack on journalist and his brother. They demanded everyone to

insist the authorities of Bangladesh to arrest and prosecute Major

Mustafizur Rahman of the Bangladesh Army for masterminding a series of

crimes against Mr. Razzak's family including pressurising the police

and civil administration to endanger lives of Mr. Razzak's family.

They also asked the authorities of Bangladesh Army to terminate Major

Mustafizur Rahman from his service for his continuous lawless

involvement in committing crimes. They also demanded that the

government must ensure all necessary treatment to the victims,

particularly Mr. Razzak and the other members of his family. Any kind

the military or police officers must be stopped immediately. They said

all the perpetrators should be prosecuted followed by thorough

investigation into the whole issue since the beginning to the present

state. And the investigation should be conducted by competent judges

of the higher judiciary for the sake of the credibility and justice.