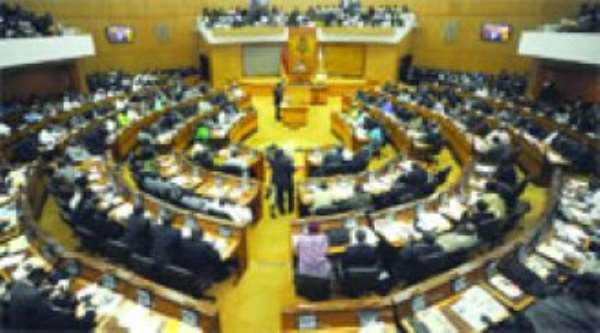 Parliament has approved the Budget Statement and Financial Policy of the government for 2011 presented to the House by the Minister of Finance and Economic Planning, Dr Kwabena Duffuor, on November 18, 2010.

The House was set agog yesterday when the two leaders contributed to the debate, which began on December 2, 2010.

So intense was the debate that the Speaker, Justice Joyce Bamford-Addo, had to stick to her resolve not to allow points of order to ensure that the two leaders had a smooth debate.

When he took his turn, Mr Kyei-Mensah-Bonsu said it was unfortunate that despite the favourable economic climate in 2009 and 2010, the government could not record the 7.3 per cent GDP growth the New Patriotic Party (NPP) administration had achieved in 2008.

He said the much-talked-about low budget deficit and soaring foreign reserves were both a “hoax”, since the government was not spending, explaining that the total spending of the government over the last two years was less than what the NPP spent in 2008.

Mr Kyei-Mensah-Bonsu stated that the government was not ambitious enough in planning for an 8.3 per cent GDP in 2013 which fell below the rebased 8.4 per cent GDP that the NPP had chalked up in 2008.

The Minority Leader said even though the NDC promised to cut down tariffs during the 2008 campaign, it had ended up increasing road tolls and property rates and introduced new taxes to increase the tax burden on the people.

The minister said the NDC had not been able to implement the one-time premium payment of the National Health Insurance Scheme (NHIS) and the GH¢200 million it promised to pay to the Savannah Accelerated Development Authority (SADA).

“My Speaker, Ghanaians are now awake and will judge the NDC by its unfulfilled promises,” Mr Kyei-Mensah-Bonsu said, adding, “By their fruits you will know them.”

For his part, Mr Avoka stated that the 2011 budget was a good one, since it was aimed at ensuring equity and fairness to address the imbalances in the system.

He disagreed with the notion by the Minority that the budget would bring about “fear and panic” among the business community, explaining that well-meaning economists, civil society organisations and the masses had all hailed it.

“If the budget was not a good one, how come that the Minority did not organise press conferences to point out its flaws as it had been doing year after year?” he questioned.

Mr Avoka said despite the oil find, the government would still give priority to the agricultural sector, saying that the good policies put in place over the last two years had ensured that nobody in Ghana went to bed hungry.

He said the budget only sought to widen the tax net and not increase taxes, as had been touted by the Minority.

Summing up the debate, Dr Duffuor stated that the NPP left behind an economy which was in “intensive care” but through the ingenuity of the NDC the economy was now stable and resilient.

He said though 2009 had come with some difficulties as a result of the economic mess created by the NPP, the government did not go HIPC.

“We used our ingenuity to get back on track with a deficit above 10 per cent,” he said, adding that more jobs would be created next year.