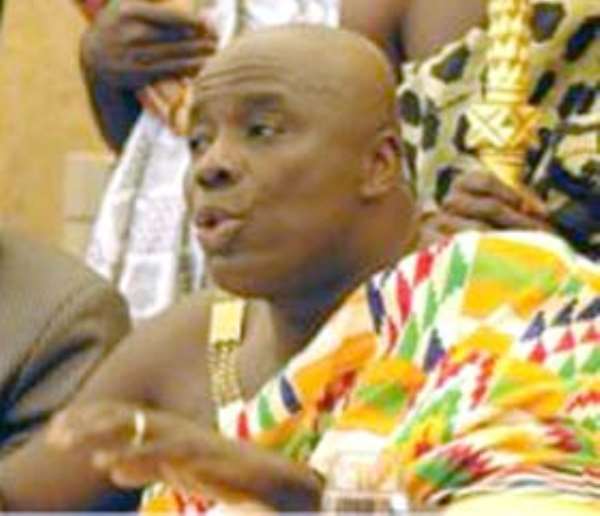 The chiefs and people of Kyebi in the Eastern region yesterday demonstrated to protest the excesses of military/police personnel sent to the town to stop galamsey operation in the area.

The security personnel allegedly fired some warning shots to disperse the marauding galamsey operators who had gathered at the forecourt of the Okyehene's palace, Ofori Panin Fie.

Six people were allegedly hit by bullets from the incident and are said to be on admission at the Government Hospital at Kyebi.

The action of the military and police has not only angered the youth of Kyebi but also the Okyehene and all his chiefs who slaughtered a sheep yesterday to signify their anger.

They later joined the youth of the town to march through the principal streets of Kyebi amidst war songs.

After the march, the demonstrators went to the East Akim Municipal Assembly to present a petition to the Municipal Chief Executive (MCE), asking him to inform the higher authorities to come and apologise for the 'extreme provocation' by the security personnel.

The chiefs of Akyem Abuakwa said they were angered because the overlord of Okyeman, Osagyefuo Amoatia Ofori Panin who was then in his palace at the time of the shooting at the forecourt of the palace, could have been hit by a stray bullet.

'We roundly condemn the excesses of the military, especially their action at the forecourt of the Ofori Panin Palace where they came and started shooting indiscriminately and all over the town even though Osagyefuo Amoatia Ofori Panin strongly objects to the activities of the illegal miners which are causing great damage to the environment,' Daasebre Boamah Darko II, Adontenhene of Abuakwa state.

According to the Adontenhene, who is also the Kukurantumihene, they would petition the presidency on the matter.

The youth of the town, most of whom are involved in the galamsey operations, accused the military of high-handedness.

The galamsey operators said the military came on Sunday, November 7 to arrest them but they managed to escape. They alleged that they saw other people mining in the same areas, the day after the military operation.

When they saw that, they went to the site to ask the security officers why they allowed other people to do the mining.

The military, they claimed, started shooting at them indiscriminately.

'The police/military team had information about the intended arson and went to the place to retrieve those pumping machines by giving warning shots to disperse the youth who had gathered there to burn the pumping machines,' he said.

He stated that it was not true that the military was just shooting indiscriminately in the town but it was because the illegal miners, who were being prevented from carrying out their activities, had organized themselves and were coming to attack his men who had taken positions to prevent the 'boys' from coming to the site to carry out their business.

'The mob barricaded the road to the site with stones and woods and the military had to dismantle the barricade and fire warning shots in the air to scare the rampaging youth who were bent on attacking the police and the military.'

He told this paper that the operation was ordered by Regional Security Council.

A supermarket operator at Kyebi told DAILY GUIDE that the only problem the galamsey operation posed was that the Birim River, which is the only source of drinking water for residents, had been polluted and the environment degraded.â€¨She therefore appealed to the government to provide boreholes to help solve the water problem facing Kyebi people.

Those who are against the galamsey operations blamed the chiefs and elders in the town for the problem because they (leaders) gave the land to the illegal miners.

The MP for the area, Atta Akyea, who visited the town yesterday following the incident, appealed to the Minerals Commission to come to Kyebi and inspect the licences of the miners.

BoG, IGP clash over attack on bullion vans
26 minutes ago