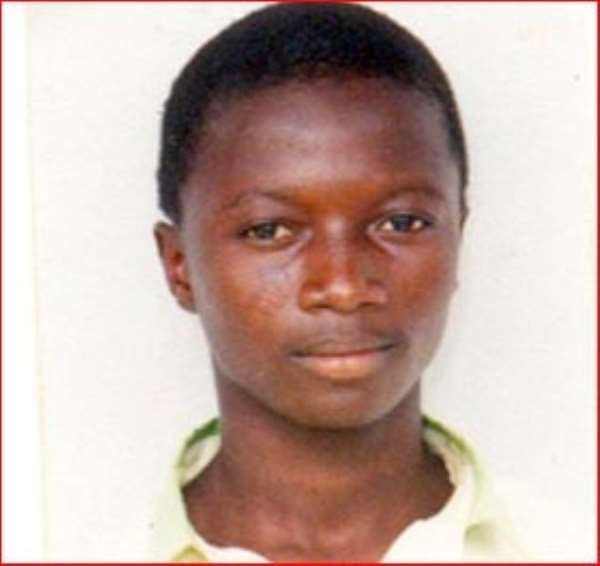 AN AWARD of GH¢20.00 and a certificate of honour, presented to the over-all best student, Master Alhassan Abubakar in the 2009 Basic Education Certificate Exams (BECE) of the Atwima Mponua District, in recognition of his exemplary academic excellence, has incurred the displeasure of some opinion leaders in area.

The award presented to the pupil during this year's Independence Day celebration in the district has sent tongues wagging as to its worth and social significance to people in the community.

Presenting the award to the pupil, the District Director of Education, Nii Amon Kotey, handed the certificate and a paltry GH¢20 to Abubakar which many have described as insulting.

The acting headteacher of the Ahyiresu Ghana Muslim Mission Basic School, Emmanuel Alale, and the mother of the student received the award on his behalf.

In an interview, the headteacher of the school said, “I am glad that this boy has been recognized and I am very proud that the district's best student is coming from my school.

“It was the first time that my school participated in the BECE and it has produced the best grade of the district. I could not be proud of anything than this”.

He however expressed great disappointment at the kind of award given to the pupil, saying “the district has been kind and honest enough to have recognized him but it should have done something better that would make the achievement worthy of emulation by other candidates”.

According to Mr. Alale, he got the information of the award on the night of March 5, 2010 and moments after, the pupil called him from his school.

“His expectation was nothing short of a scholarship for his senior high school education so I know he would be disappointed to hear that he received just a certificate,” the headteacher.

Commenting on the GH¢20 and certificate prize, Abubakar's mother said she had so much work to do on her farm and if she had known the award package would be that paltry, she would not have bothered to accompany her son.

She complained bitterly that she had to borrow money for her transportation in order to witness the ceremony, hoping that her son would be presented with something worthwhile.

Meanwhile, the headteacher has wondered if what people call scholarships for needy but brilliant children exist in the country.

Sounding demotivated, he said “this is a child from a village where electricity is not known and a family of extreme poverty, and so a praiseworthy prize, not a mere certificate and GH¢20, was expected”.

In his view, perhaps the organizers did not take time to find out the background of this poor boy, which to him is not too late to do so, stressing that if the boy was a 'big' man's son, he would have enjoyed scholarships to the university level.

The school that produced this pupil is Ahyiresu Ghana Muslim Basic, located within one of the villages along the Bibiani-Goaso road.

The school, though very deprived, did not only produce the best grade but also scored 100 per cent in the BECE as all the 14 candidates who participated in the examination passed, said the headteacher.

When asked about the challenges facing the school, Mr. Alale disclosed “we have so many challenges, the greatest of which is overcrowding in the classroom.

The few classrooms we have, have been locally built with mud and sticks and are therefore not up to standard.

“The rooms are too small in size to accommodate 40 or 50 pupils in a class but that is what we have and we are struggling with it. You enter a class and it is so crowded that teachers cannot even move around to inspect children's work.”

He said a foreign Muslim missionary wanted to help the school by starting a six-classroom block project but this was halted as a result of last year's credit crunch.

Mr. Emmanuel Alale, therefore, on behalf of the school authorities made a passionate appeal to philanthropists, private individuals and other stakeholders to help complete the project.