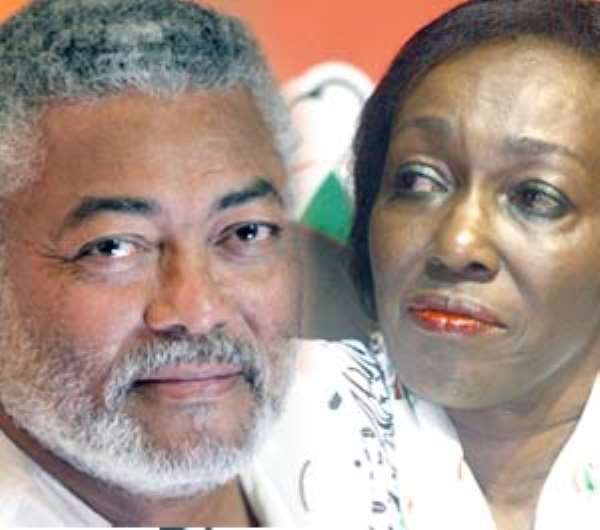 Former President Jerry John Rawlings has, on the eve of the titanic 2010 National Delegates Congress of the National Democratic Congress (NDC), holding in Tamale, sent out his final word to delegates attending the congress, asking them to elect the right people as national office holders.

The NDC father and founder once again emphasized that the congress was being influenced by some powerful people in government and urged delegates to elect what he described as “people of proven integrity who have paid their dues to the party”.

He hinted that he was getting embarrassed by the spate of vote-buying and class system in the party, adding that the ruling party had so soon become a laughing stock of opposition parties.

Delivering a pre-conference message yesterday, the revolutionary ex-junta leader cautioned that the choices of delegates at today's congress would determine whether the party was treading the path of success or bound for collapse.

“Those who are distributing these monies are members of government or government-sponsored candidates who have refused to sell their qualities to delegates but have rather chosen to buy the delegates. This is alien to the party and so embarrassing that we have become the laughing stock of our opponents and a painful reminder of the rot of the immediate past, on our ordinary supporters, who have sacrificed for the party through some very difficult periods,” he said.

According to Rawlings, the NDC was currently at a crossroads, not only due to the global economic crunch, but also as a result of the failure of the 'umbrella party' to meet the aspirations of its membership, stressing that elitism and other abominable practices had been introduced into the party.

“We are undermining the very weapon that gave us power – integrity. Some of the elements who have managed to emerge through this abominable syndrome are unfit for party office. Are we making progress or declining?” he queried.

The former President lamented that two years into government as a party, and the majority of Ghanaians were glaringly unimpressed with the state of the nation and found it strange that those at the helm of affairs were only engaged in self adulation and praise to please themselves. He called on the delegates to stand firm and resist the massive vote-buying that was going on.

“Let us not be intimidated by people who seek office because they have direct links to so-called powerful people in government or party. This process is about the strength and structures of the party”.

Meanwhile, the former First Lady, Nana Konadu Agyeman Rawlings, who is seeking election as vice chairperson, has also condemned the vote-buying in the party and stressed that the party needs to be strengthened in order to form a strong government.

“In every country, it is the party that holds up a government, not a government holding up a party. It is never done anywhere. So once the party is weak, we cannot then guide the government in areas that it should work hard and areas where it's not doing well, and we should be able to let our government know what the people are saying”.

Speaking to myjoyonline.com, Mrs. Rawlings also admitted that the Mills Administration was performing far below the expectation of Ghanaians.

“It's not what is in the newspaper. It's not what people are saying on the TV. Go to town…you don't even have to walk far, and they will tell you a lot”.

She expressed confidence that the delegates would vote for her because the people had confidence in her.

“We struggled to put the party where it is and I would want to go there to help continue in the forward march of the party. I do hope that delegates will vote in the right direction”.

In a related development, the Majority Leader in Parliament, Alban Bagbin, has declared his stand in the elections when he placed his bet on three crucial persons to steer the party's affairs towards election 2012.

Speaking to Citi Fm, Bagbin said, “I will be sad if Nana Konadu Agyeman Rawlings, her Excellency, doesn't carry the day.”

He also thumped his finger for the re-election bids of two incumbent executives who were seen to be instrumental in the party coming to power.

“I know definitely that NDC National Chairman, Dr. Kwabena Adjei and party General Secretary, Johnson Asiedu Nketia, have performed very well and it is through some of their initiatives and hard work that we managed to take power from the NPP and I don't see why the delegates will not retain them…For me, they know that I am seriously one of their disciples and I know that there will be no need to say no to any of them.”

The NDC 2010 congress is seen as a make-or-break for the party, following the deepening cracks along the Rawlings/Mills lines.

The 65 candidates vying for 10 positions are said to belong to either the founder or the current president.

If the last congress held at Sunyani and Winneba to pick the national youth organizer and women's organizer respectively is anything to go by, then indications are that the Mills faction could carry the day. For now, observers say whichever way the results go, the party is likely to see more 'pissing in' from the losing faction.