BDR men killed one after another in the custody after mutiny 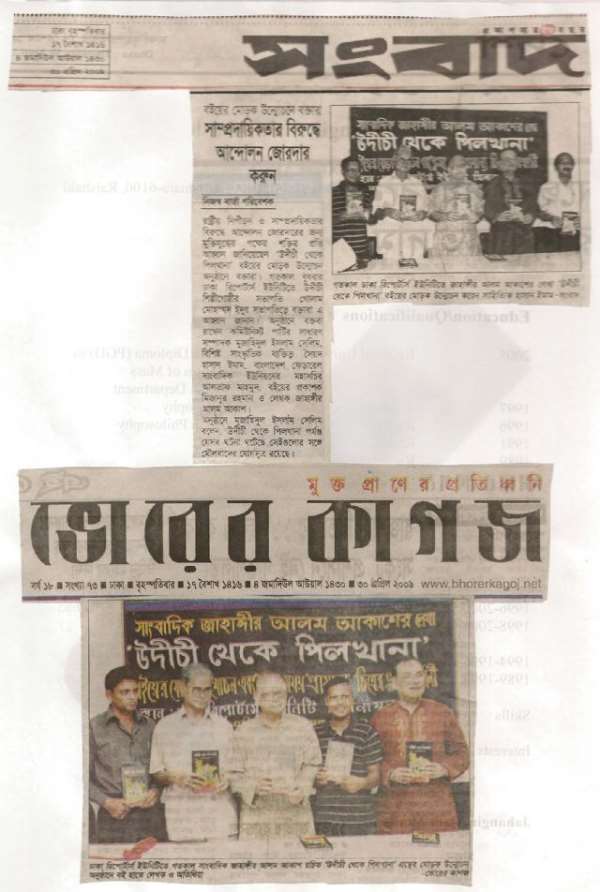 By Jahangir Alam Akash, A Bangladesh Rifles soldier, arrested on May 13 in connection with the February 25-26 rebellion, died in Chittagong Medical College Hospital early on 30th September, 2009. Source: the New Age, 1st October, 2009.

So far, 47 BDR soldiers died in Dhaka and elsewhere in the country after the February 25-26 rebellion. The deceased, Abul Khayer, 38, of Panchbibi in Jaipurhat, was a lance nayek posted to the BDR Training Centre at Satkania in Chittagong. Khayer was one of about 100 accused in the case filed in connection with the rebellion at the training centre after the rebellion in the BDR headquarters. Seventy-five people, including 57 army officers, were killed during the rebellion.

A home ministry committee investigating the reasons behind the rising number of “unnatural” deaths of BDR personnel in custody has once again failed to submit its report and sought time extension for the fifth time.

The figure of custodial death has reached 47, but the committee has made little headway in its investigation in the last four and a half months since its formation on May 14. The latest deadline for submitting its report expired September 16.

Previous report:
46 BDR were killed regarding mutiny!
By Jahangir Alam Akash, In custody BDR men killings going on in the name of heart attacked or other illness in Bangladesh. After torture BDR has been died, but government said it was not true. They said, the BDR men were died with heart attacked or other illness. Around 4,000 BDR men were ready to trial for mutity. On 25-26 February, 2009 BDR were revolt for their human rights. In mutiny 75 were killed including women and civilians. Another two BDR jawans died on 27th and 28th September, 2009. Source: the daily Star, 29.9.2009.

Another BDR member Shawkat Osman, 28, died at Mitford Hospital on 27th September, 2009 night. He was an accused in the BDR mutiny and was at the Kashimpur Jail. And Osman fell sick in the jail on same day and was taken to Mitford Hospital afternoon where he died at night. BDR killings after torture lists raising day by day. With these 46 BDR men were died in custody since the paramilitary mutiny in February 25-26, 2009.

Sources said, of these 46 deaths, autopsies of 11 BDR members were conducted through the New Market police. Quoting the earlier autopsy reports, New Market police confirmed that two of these jawans were killed. The victims were lance nayek Mobarak Hossain of Battalion-29 and havildar Mahiuddin of Battalion-28 of Chittagong. Mobarak Hossain died on March 23 while Mahiuddin on May 5 at Dhaka Medical College Hospital.

Earlier this year, families of the two jawans brought allegations of murder. Meanwhile, Nayek Nurul Amin, 48, of Patuakhali, died of cardiac arrest on 28th September, 2009 at around 11:00am. His body has been sent to Patuakhali. Nurul Amin was serving at Khanpur Border Outpost (BOP) under Talaimari BDR Company in Rajshahi. He was taken to Rajshahi Medical College Hospital on 28th September. He was declared dead there. His autopsy report read that he died of cardiac arrest.

Previous report: By Jahangir Alam Akash, Another two members Bangladesh Rifles (BDR) were tortured and struggle for their life while they were in safe custody. The tortured were admitted to the Dhaka Medical College Hospital (DMCH) on 14th September, 2009. They were tortured by the members of Task Force for Interrogation (TFI) cell during questioning about BDR mutiny case. Members of the TFI cell and New Market police admitted them at around 5:00pm. Source: the daily Star, 15th September, 2009.

Sources said, the ailing BDR members are Reazul Islam, 22, of Battalion-5 in Khagrachhari, and Mohammad Arafat, 24, of Battalion-13 in Dhaka. Both the BDR members were present at BDR Headquarters during the so-called mutiny on February 25-26. They bore severe injury marks on their knees, which indicate they suffered torture, sources added.

While lying on the DMCH bed, one of the BDR members said, “We were tortured brutally during the interrogation since we had been taken to the TFI cell on 10th September, 2009.” New Market Police Station officer-in-charge told, “We were told from Pilkhana over phone about the sickness of two BDR members and then our men took the members to hospital.” Asked about the sickness of the two members, Senior Assistant Superintendent of Police Abdul Kahar Akand of CID said, “I heard about the sickness but yet to know the cause as they were being interrogated under TFI cell.” “We have taken 16 more jawans on Thursday for interrogation under TFI cell,” Akand, also the main investigating officer of the mutiny case, added.

Hottest Photo Reports
Catch up with all the political quotes from our politicians.
Advertise here
More Laws
ModernGhana Links
6 guide to Social media for lawyers in Ghana
My Due Love for Guernsey.
Challenge to Bangladesh
Army wanted to kill me and justice
The Police, BNI and the Rule of Law
State killings!
46 BDR were killed regarding mutiny!
Peace and democracy how far from Bangladesh?
Two more BDR members tortured in custody!
TOP STORIES