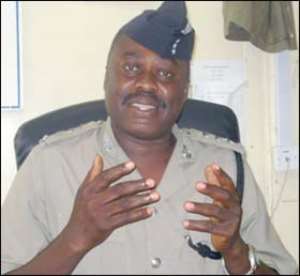 DSP Kwesi Ofori Former President John Agyekum Kufuor's private residence is in the news again after an order from above directing that a case, in which some media persons were allegedly assaulted at the place, be transferred to the Criminal Investigations Department Headquarters.

According to a press release signed by DSP Kwesi Ofori, Director of Public Affairs of the Police, “the CID has taken over investigations into the case involving some security officers who allegedly assaulted some media persons at ex-President Kufuor's residence.”

The Police is assuring the general public and the victims of the alleged assault that it would undertake a thorough investigation into the incident and as the release put it, “take the necessary action thereof.”

The internal security organisation also called on all parties involved in the case to cooperate with them in their investigations.

The new turn the case has taken has tickled a number of persons and prompted to ask why it has been taken to such heights.

One such person asked rhetorically whether the matter is not being manipulated by someone for political reasons.

It would be recalled that after one of the downpours a few weeks ago, one of the walls in former President Kufuor's residence collapsed and the head of the National Disaster Management Organisation (NADMO), Mr. Kofi Portuphy, in an unusual fashion organised a select group of media persons with which he stormed the location, with no appointment.

Upon reaching the Airport West Residential area where the property is located, Mr. Portuphy sought to enter the house but even without prior appointment, Mrs. Theresa Kufuor allowed the man to enter but asked only a few reporters to join him.

Even before that aspect of the pre-entry arrangement could be concluded, one of the reporters was making a live report to his radio station.

The security personnel at the place, finding the development unacceptable, were said to have stopped the filming of the private residence and the ongoing live report.

The media persons insisted on doing just that, with some even attempting to force their way into the house.

A fracas ensued and the security seized one of the gadgets and hurled it to the ground in a bid to stop the filming and the live reporting since according to one of them, “this is a private property and you have no permission to do what you are doing.”

Mr. Portuphy's earlier statement that the former president's house was constructed on a waterway but which he later denied compelled people to question his real motive for embarking on the trip to the residence.

For many, it was part of an unfolding ploy to present the residence in a bad light and then seek to pull it down.

As for the choice of the media houses which accompanied him to the Kufuor residence, it left many with misgivings about Mr. Portuphy's sincerity.

Other questions being posed by curios persons about the turn of events is why the Airport Police, in whose jurisdiction the incident took place, is being left out.

They also want to know why other cases such as the many assault cases at the Konkonba Market which took place in the early days of the incumbent administration have gone untreated as victims continue to lick their wounds with justice no where near them.