Mills flies out for cash 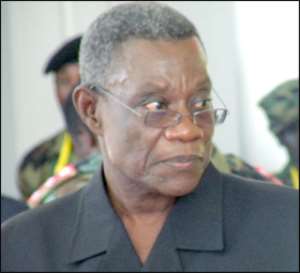 As the President winds up his honeymoon, the stage is set to embark on his first official visit outside the West African sub-region.

President Mills is emplaning to the United Kingdom to have a chat with the Queen as well as dine with Gordon Brown at 10 Downing Street in the hope of receiving financial bailout from the biting effects of the credit crunch which is emasculating the local economy.

According to President Mills, he is leaving for London between May 6 and 7 in the hope of bringing sack-loads of cash to support the economy.

He told journalists at his maiden press conference at the Castle, Osu on Tuesday that he was on his way to get Ghana's share from the G-20 windfall earmarked for developing economies. “We will be in London and bring Ghana's share,” he said.

The President lamented that he was not given the proverbial 100 days honeymoon normally accorded new heads of state.

Presidents are assessed on their performance in the first 100 days of being in office and many consider it the goodwill period of presidencies since the First Gentlemen are spared most criticisms.

Unfortunately, President Mills was robbed of such a goodwill because no sooner had he assumed the leadership of this country than the media began putting his government in the spotlight.

Even his swearing-in ceremony was fouled by the seeming blunder in the oath-taking aspect of the activity.

Indeed, while some argued that the procedure should be repeated since it formed a somewhat sacred aspect of the constitutional requirement behoving every incoming president, others thought it could be glossed over.

The position of the former was given impetus when the then incoming US President Barack Obama was made to repeat his oath because of a defect in the earlier one.

Indeed the matter did not receive any mention by the new administration, suggesting that they did not think the matter was worth considering.

President Mills had the misfortune of picking a lot of defects in the previous administration and gave an assurance that when given an opportunity to lead, he would be different, adding, “We would hit the ground running”.

Ghanaians were compelled to begin assessing him from day one of his assumption of power and for instance, expecting him to announce the reduction of fuel price without delay.

When he finally reduced the price, it was considered marginal and of no significant effects on the lives of Ghanaians.

President Mills announced also that he would provide uniforms to school children and although he sounded this in his maiden budget as though to tell Ghanaians he had not forgotten his pledge, he is yet to make good that pledge.

The first few days of the Mills Administration and in fact to date, has been characterized by the incessant and somewhat careless seizure of cars from former government officials under the pretext that they were state assets.

The exercise was undertaken with such a reckless abandon that it has become a source of embarrassment to some doves in the NDC, with constant rendering of tons of apologies.

As we discuss and review the first 100 days of President Mills, a vehicle belonging to the 2008 flagbearer of the NPP is sitting at the Customs, Excise and Preventive Service (CEPS) headquarters. Interestingly, this is the second vehicle of the former Foreign Affairs Minister to be seized under crude circumstances.

The National Security apparatus working in tandem with CEPS claims that the duty paid on the vehicle was an underpayment. It is amazing how the vehicle was registered at DVLA where a CEPS officer ensures that the right payment is made before the registration process is effected.

President Mills' promise of uniting the country as a father of the nation appears to have fallen flat when considered against recent remarks from his lips and agitations from tribal groups.

When a delegation of the Ghana Journalists Association (GJA) called on him at the Castle, the President made headlines after his innuendo-laden remarks.

It was during this engagement with the GJA delegation that he made his infamous “I am the only President in this country” remark.

That remark, it would be recalled, was given an assortment of interpretations because many wondered what exactly prompted the outburst and what the President sought to achieve by it.

Some even thought he was directing his umbrage at ex-President Rawlings until they thought they got a better picture and concluded it was prompted by the large crowd which welcomed Nana Addo Dankwa Akufo-Addo at the airport when he arrived in the country from a foreign trip.

Even though President Mills told journalists at his maiden press conference on Tuesday that no particular individual was his target, he succeeded in confusing the public more, since his spokespersons had taken swipes at some members of the opposition, especially Nana Akufo-Addo.

The handling of the Jubilee House issue by the President is anything but good. After expressing delight in the project and readiness to occupy the structure, there was an abrupt silence.

Be it as it may, President Mills eventually moved into the Castle and it appears the place would remain the seat of government for the time that the NDC would be in power.

He said at the press conference that he is not in a hurry to occupy it, because it falls short of his priority.

President Mills has promised to re-visit certain sore issues like Dagbon so that as he put it, justice would be done.

To date, it does not appear that he is near making good such a promise even as those who were elated by the promise continue to sit in limbo.

The first 100 days of Mills' presidency has showed a number of lapses which suggest that there are a number of power centres at play.

Many have asked whether President Mills has total control over the machinery of government as it were. He has also recorded moderate gains even though Ghanaians see their Vice President, John Mahama more than the President.

President Mills appears to be operating under the overbearing presence of his mentor ex-President Rawlings who has for the second time flayed the man he supported during the last campaign season to win political power.

Rawlings scowled at his man for allowing DCEs to remain at post until as President Mills put it, further notice.

As soon as Mr. Rawlings raised this objection, President Mils reacted by firing all the officials, leaving many Ghanaians to wonder whether the President is his own man.

Then came the issue of security chiefs who were shown the exit as soon as Mr. Rawlings went public and poured scum on President Mills for allowing these persons to continue to be at post.

Ex-President Rawlings recently virtually passed a vote of no-confidence on President Mills, describing some ministers in the man's cabinet as mediocre, an outburst many saw as an undermining campaign.

However, the President has stated that he is happy with his pace in the face of legal and constitutional logjams.