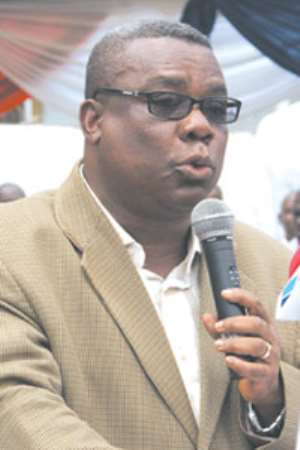 THE PRESIDENT of Ghana, His Excellency Prof. John Evans Atta Mills and the National Security apparatus have been cautioned to closely monitor the movements and actions of former President Rawlings in order to avoid the repetition of the1979 unfortunate incident.

According to the NPP constituency chairman for Asawasi, Mr. Peter Okyere, recent utterances of the former President, vis-à-vis the high political tension prevailing in the country, must be a source of concern to all peace loving people in the country.

Speaking to The Chronicle in an interview, he said the recent outburst of the former President and the tribal and ethnic sentiments that characterized the nation's politics were not mere coincidence, and the earlier the security machinery held Mr. Rawlings in check, the better it would be for the peace and stability of the country.

He noted that in 1979 after the official hand over of power to the then democratically elected government of President Hilla Limann, the former President went about organizing public lectures and holding meetings, during which he castigated the then government and prepared the minds of Ghanaians before embarking on a second coup d'etat.

Mr. Okyere emphasized that the former President went to South Africa a few weeks ago where he delivered a lecture on tribalism and ethnocentrism at a time the issue had become very topical in the country. “Is this sheer coincidence or an orchestration? “he questioned.

He cited the recent agitations by the people of the Greater Accra Region over former President Kufuor's office and the demands being made by a group of people in the Western Region and recently the Youth of Akyem, as some of the tribal issues which the former President wants to take advantage of so that he could do his own thing.

The NPP Chairman, therefore called on the former President to allow the current government, led by Prof. Mills to perform its duties and desist from dictating the pace.

“Rawlings must know that we have only one President who was democratically elected into office by majority of Ghanaians, so he must allow him to perform his functions,” he stressed.