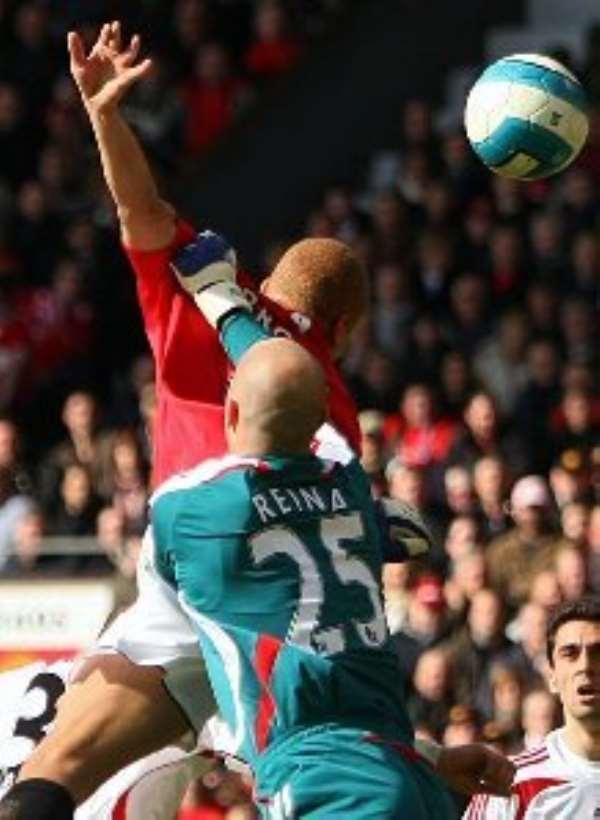 Manchester United tightened their grip on top spot with a 3-0 victory over ten-man Liverpool in a dramatic encounter at Old Trafford. Referee Steve Bennett, at the centre of the action throughout, decided not to award a penalty to Wayne Rooney in the opening few minutes after the Manchester United striker found himself on the receiving end of a mistimed challenge from Jamie Carragher but battled to stay on his feet.

Jose Reina's error then allowed Wes Brown to head home Rooney's cross after 34 minutes, before Javier Mascherano was controversially shown a second yellow card on the stroke of half-time for dissent. United dominated possession after the break and made sure of the points as Cristiano Ronaldo capitalised on another mistake from Reina to nod in a second in the 79th minute. Nani then fired a stunning third past Reina to add gloss to the scoreline for United and leave Liverpool just two points above Everton in the race for fourth place.

In a frenetic start the opening tackles were sharp. Scholes went in on Xabi Alonso and Ferdinand on Fernando Torres before Mascherano went too far and was booked for cutting down Scholes.

Akufo-Addo Has Turned Ghana Into 'Hell-Hole Instead Of Parad...
55 minutes ago