It’s Not A Dynasty - Addo-Kufuor 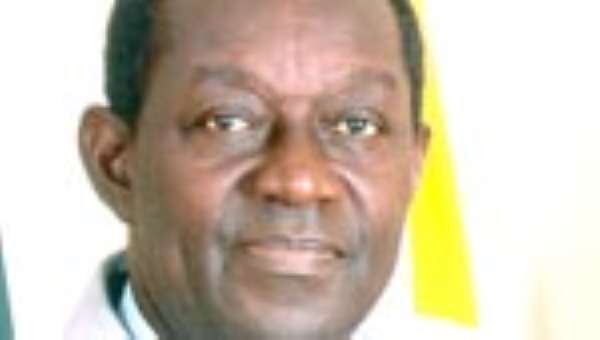 HON. KWAME Addo Kufuor, former Defence Minister and an aspirant in the New Patriotic Party (NPP) presidential race has noted that those using his affiliation with the President in campaigning against him have all got it wrong.

To him, a political party was synonymous with an association which two identical twins could join and even vie for the same position, so long as they do not contravene the rules of the association.

Answering questions from NPP constituency executives drawn from Takoradi, Effia-Kwesimintsim, Sekondi, Essikado-Ketan and Mpohor-Wassa-East at a special meeting in Takoradi on Thursday, Addo Kufuor stated that what Ghana needed was a visionary and competent leader to continue the good works of the ruling government.

He wondered why some people were crying foul about his ambition to occupy the presidential seat which his biological brother, President John Agyekum Kufuor, would be relinquishing after the 2008 general elections.

Describing the whole scenario as very unfortunate, Dr. Addo Kufuor said “When my brother, the President appointed me Minister of Defence and saw that I was very effective and competent, he added the Interior Ministry to my work and there was peace and stability in our country.

Nobody complained of dynasty or why a brother should appoint a brother to handle that delicate portfolio”.

He intimated that when it comes to public life and positions, people should not look at family matters or dynasty, saying he and President Kufuor were apart in public life. “Why did I have to be vetted by a committee upon my appointment as minister when my own brother was President?”

To further debunk the issue of dynasty, the presidential aspirant asked the NPP executives and prospective delegates whether they joined the NPP because of their brothers or sisters, noting, “I am vying for the presidency not because of my brother, so the onus lies on the delegates to vote for me or not?”

According to the Manhyia MP, when given the nod at the national delegates' congress, it would be a foregone conclusion that the presidency was for the NPP, and advised the delegates to vote for a visionary, transparent and qualified leader of his caliber, who understands the security issues of the country.

He mentioned some of the numerous legacies that the
NPP administration would leave behind that needed to be continued by him.

Hon. Addo Kufuor, who was president of the Ghana Medical Association (GMA) for three consecutive times, observed that all over the country, the party's foot soldiers were aggrieved for some sort of neglect which he blamed on the entire NPP members including himself, but said he would find an antidote to it when he gets the nod to lead the party and consequently the country.

He admonished would-be delegates to be circumspect on December 22, the day when a flagbearer would be elected for the party, because the future of their children and the country would be determined on that day.

He stressed that the delegates could take the cash, clothes and other items that some aspirants would want to entice them with, but should not sell their conscience.

On his part, Mr. Owusu Afriyie, alias Sir John, Campaign Manager of the Addo Kufuor Campaign Team, enumerated the numerous achievements of his boss including peace in Ghana for seven years without military intervention, the Kofi Annan Peace-keeping Centre, Post Graduate Medical Centre at 37 Military Hospital, Computer Centre at Burma Camp and many other development projects initiated at military barracks throughout the country.

He contended that if delegates should check the track records of all the NPP presidential aspirants, they would realize that only Dr. Addo Kufuor could do the presidential job with competence, effectiveness and distinction.