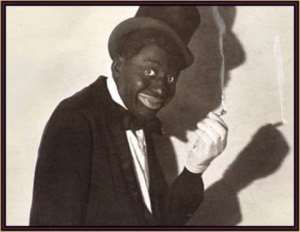 Black people in our society are over-represented in the entertainment industry for reasons I don't exactly understand. Rappers, drug dealers, ballers, sitcoms about dysfunctional families; it seems often that they get more slapstick or delinquent rolls. Spike Lee makes commentary on this in the movie Bamboozled. In the film a writer played by Damon Wayans is trying to get himself fired by making a show with actors in blackface. He figures it will be so controversial it is bound to get him canned, but to his chagrin the show is a big hit. What is disturbing about the movie is that you find yourself laughing at the skits even though they are horribly racist. Dinesh D'Souza in his book Letters to a Young Conservative (Yes, I actually read it) says that white people generally suspect that blacks are stupid, so maybe this is why we would find it easy to laugh.

You may find this surprising or you may not, but apparently blacks score on average about 10 points lower on the IQ test than whites. There was a heavily controversial book that compiled all this data in 1994 called The Bell Curve. It was written by a Harvard psychologist named Richard Herrnstein, who states that beneath all of the social problems racial minorities have is a root problem: low intelligence. The book kicked off a controversy among psychologists that one scientist and author called "The Bell Curve Wars."

Both of these expectations turn out to be patently false. The average IQ of young people in the US is actually skyrocketing -- about 10 points average increase in 30 years. Basically put, if you give the exact same IQ test to a kid today that was given to kids in the 60's, on average the modern kid will do 10% better. Black kids today are scoring the same as white kids in the 60's and test administrators keep having to make the test harder and harder to keep the average at 100. This IQ drift is known as the "Flynn Effect", and it is happening almost all over the world. Scientists are baffled and are struggling to explain it. One of the big theories is actually that the emergence of neurologically stimulating video games is fueling the spike, or perhaps it is the information deluge that came with the internet. In any case, the Flynn Effect is dramatic proof that the IQ is in a very large part determined by the environment in which the child is raised.

Finally, the IQ test is fairly widely considered by psychologists to have class and cultural biases. I remember when I was administered the IQ test in elementary school. For one section I was asked to pronounce a list of words. Any word I pronounced incorrectly was taken off my score. Obviously wealthy children will be exposed to a more high brow vocabulary on average, as well as the proper ways to pronounce the words.

So if someone tells you that there is scientific proof that black people are dumb, they are full of shit. What is more defensible surprisingly is that video games can make your kids dramatically more intelligent. When I have kids, I'm going to buy them an X-Box.