Presidential Convoys And the Fast Lane 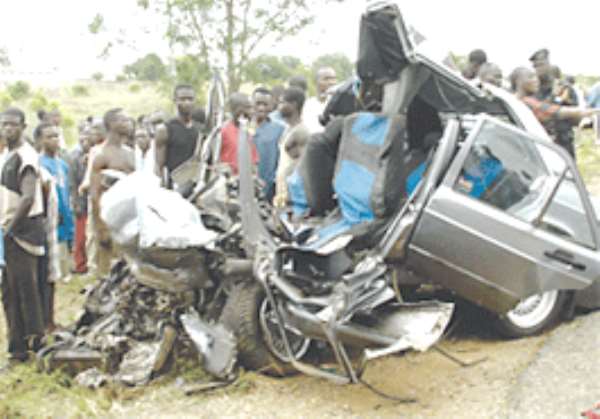 Close to the end of the tenure of Flt Lt. Jerry John Rawlings as President of Ghana, there was a near miss, when traveling along the Tema - Accra Motorway, some cars in his convoy were involved in an accident after a motorist using an unapproved route crossed their path.

The question about speeding presidential motorcade then dominated the headlines for a while. But as is characteristic of us, within a few weeks it was pushed to the back burner and we continued with our lives as if nothing happened.

Under current President J. A. Kufuor, there have been reports of vehicles in his convoy getting involved in accidents, with one resulting in the death of one dispatch rider. Again, some concerns were raised about the speeding of these convoys.

There was a general outcry over speeding on our roads when three urologists died through a motor accident, while on national assignment. A lot of analyses were made on the causes of accidents, and what could be done to reduce them.

Over the weekend, the convoy of Vice President Alhaji Aliu Mahama was reported to have been involved in a road accident, leaving about three persons dead, with several others in critical conditions.

Whatever the immediate cause of the accident was, there is no doubt that speeding would have played a key role in the degree of damage to life and property caused by the accident.

Our screens and airwaves have never ceased to bombard both motorists and commuters with images and sound bites on the need to be moderate in speeding, particularly considering the condition of many of our roads. That message, without doubt, goes to all without exception.

The Chronicle grants that the security of our President, his vice and other high profile personalities are very important and therefore in ensuring their safety, swiftness is of importance in transporting them.

However, we ought to be mindful also that our roads are not the best and therefore if we are not careful, in the attempt to escape any potential mischief by adventurists, we may be putting the lives of our leaders at higher risks through speeding.

The question to ask is; is the risk involved in always putting our presidential convoys on the fast track worth it?


As we have always maintained: Accidents don't just happen; they are caused. Therefore in analyzing them, it is important that critical attention is given to all contributory factors and every stakeholder addresses those within their control.

It is the view of The Chronicle that the speeds at which the presidential convoys often fly are just dangerous and a second look ought to be taken at that.

They must not always be in the fast lane!