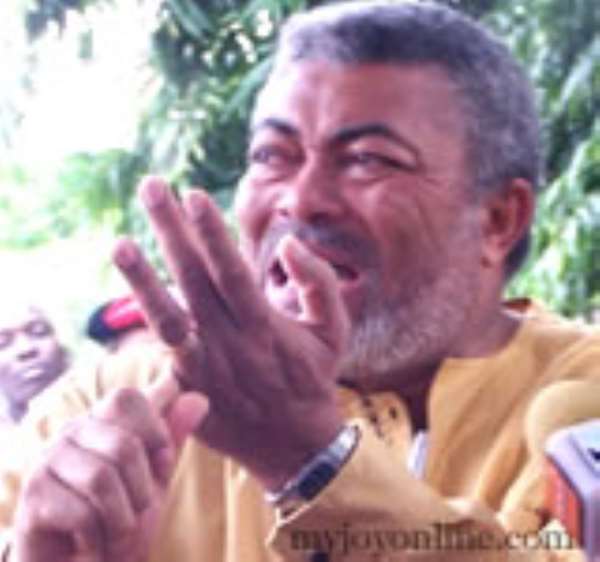 NDC Founder Cautions Victor Smith And Supporters Of Various Candidates To Put Party Interest First
The Former President, Jerry John Rawlings has urged individuals supporting various flagbearer aspirants of the party to desist from doing anything that might irreparably do damage to the fortunes of the NDC.

“If we carry on in this way, we might end up doing irreparable damage to the party,” Flt. Lt. Jerry Rawlings said.

The founder of the NDC made the above submissions in a brief interview with The Lens yesterday when the paper sought his views on the reported attack on Dr. Ekow Spio-Garbrah, one of the NDC candidates by his Special Assistant, Mr Victor Smith.

Yesterday's Independent newspaper carried a story headlined: “Rawlings' Aide Writes Off Spio-Garbrah….describes him as a liar and a part of NPP orchestration.”

In the story, Mr Victor Smith, the Special Assistant to the NDC Founder was quoted as saying that Dr Spio-Garbrah has resorted to telling lies about the former Vice President- a typical example of which is a damning text message, he sent to the former President on Prof Mills' health.

“Those sentiments expressed by Victor Smith do not reflect my thinking at all,” President Rawlings stated.

“All the candidates vying for the party flagbearer position are credible, competent and capable of providing good leadership for the country. I have a great deal of respect for all of them,” President Rawlings explained.

He said that his Special Assistant no doubt has his personal convictions and has been known to defend them passionately. “He does so sometimes because many others who should speak up fail to do so”.

The NDC Founder however stated that the difficulty many times, has been the tendency for his personal opinions and convictions to be misconstrued by the public as my sentiments. “The opinions attributed to him by the newspaper are not my sentiments at all,” President Rawlings said. “I will be one hundred percent behind whoever the party chooses to lead us into the 2008 elections.”

“If the campaign team members and the supporters of the various candidates are not reined in, how can the party successfully bring on board all the many party supporters who will be on the losing side,” the former president queried.

“Some of us are being very myopic and in the process uprooting our support base,” The NDC founder said.