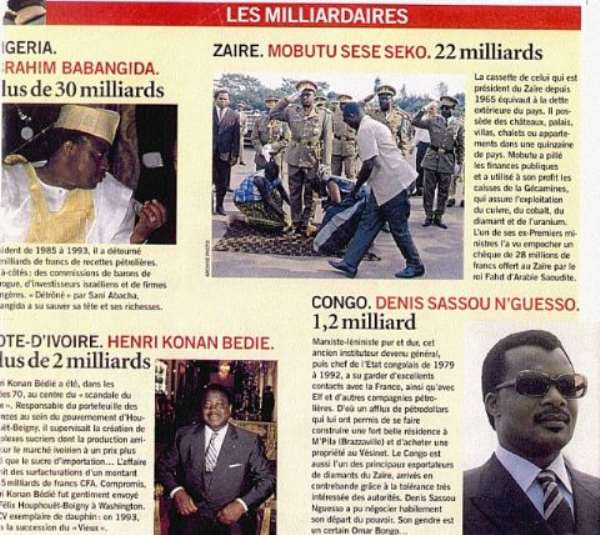 It’s an attested fact that no monkey would pluck fruits from the trees and lose them to the Antelope when her kids are starving, yet African leaders stash lots and lots of monies in Swiss and other European Banks when several thousands of Africans go hungry, with no education, and infrastructure is non existent. Does this suffice to say that African Leaders do not have the brains of even Monkeys? Just cast your mind a few years back and you’ll remember Mobuto Sese Seko of former Zaire, Sani Abacha of Nigeria. How could Omar Bongo of Gabon support an electioneering campaign in France when people don’t have food to eat in his own country, when there is only one road in Gabon? The late President Felix Houphouet Boigny of Ivory Coast was a confident major sponsor of Jacques Chirac’s maiden campaign in which he lost to Francois Mitterrand, whilst many Ivorians were and still are hungry. This is the reason why I find the call by Ghana’s Deputy Minister Of Foreign Affairs for Ghanaians, and for that matter Africans, to pray for God’s intervention “a childish call”, one of a low opinion, a disgrace to his common sense, the Government, and the African Leadership. If there are any people on the earth who worship God best, then it must be Africans. Go through churches on one Sunday morning and find how many prayers are said for Africa, its leaders, as well as for others worldwide. When our leaders go globetrotting, siphoning national cash to Switzerland, killing each other, and backbiting everywhere, and having no iota of commitment and dedication to duty, do they expect God to rain manner on Africa? Tell them, they should stop amassing wealth for themselves, instead spend the money to develop Africa. There are several rich people within Africa who can feed several thousands of people within their countries for the rest of their lives. Instead, they buy luxurious cars that are not used by even US Presidents, or European Presidents. Tell that AMA Boss to sell two of his six cars, and donate that money to some children at the Osu Children's home. How could Minister Broni ask for well over 500Million cedi worth of 2000 model Toyota Landcruiser when the source of that money, Timber, comes from remote areas of Ghana with no portable drinking water? Do they have any conscience at all? When President Kuffuor decorated his house as if he's a Prince of a rich Saudi Oil Merchant, did anybody confront him? Our own leaders rather went on defending the indefensible. You're all crazy baldheads! God will punish you one by one! See the Chief Justice, they shall all follow one by one. This is not a curse. Rawlings, Selormey, Peprah, Kufuor, Agyapong, Akuffo Addo,... all of you! The leaders are a disgrace to the youth of Ghana and Africa at large. Travel around the globe and see how Ghanaians and other Africans are doing anything to survive everywhere. You think they can't do this at home if they could earn a livelihood from that. You shake hands with young handsome Ghanaian graduates and they're in a hurry to pull their hands away because of their gritty palms. It's really a shame! Tell them, Heaven, and for that matter God, helps those who help themselves. Tell that deputy minister of foreign affairs that he should walk through the churches of Ghana and hear how much prayers are said for the country, the president, and the ministers. Yet, THIEVERY continues to be their working goals, whilst the ordinary Ghanaian cannot even pay for his child's school uniform. I bet you, if Ghana wanted to make education free from primary to university, we could easily do that. Look at all this money from VRA that Wireko Brobby spent on his "immoral sex trips", See all the fruitless joy trips that Kufuor undertakes just as an ambition to visit every country in the world before leaving office, look at Ishmael Yamson, look at Sam Jonah, Asuma Banda, Goosie Tanoh, look at the presidential entourage to the big Akwasidae in Kumasi last year, their fuel, per diem, hotel and all. They could have just built a small school somewhere and a village teacher contracted for 100,000 cedis a month to teach a hundred pupils. Our failure stems from our leaders. Despite the availability of abundant resources, most African countries are poor because of corrupt leadership, intolerance and bad attitudes of the people in high offices. At times I wish God was a Nigerian or an Arab, so he'll just strike them like he did to Ananias and his wife when they lied. As for the pastors, don't complain, from Mensah- Otabil to Duncan Williams, to Dag Heward Mills. They're all hypocrites. They wear several thousand dollar designer suits, Agbada, and stuff like that and drive in super luxurious cars whilst they advise their members to continue to fast. They may be doing something, but they could do better. I tell you, if things don't change in the nearest future and Africans start denouncing God, it'll even be a disaster. I'm sorry, but I seem to be so sad and bitter from the attitude of all the leaders, political and religious alike! Steffan Schmidt. A Sympathizer of Africa. Views expressed by the author(s) do not necessarily reflect those of GhanaHomePage.