Should Government Give Christmas Gifts? 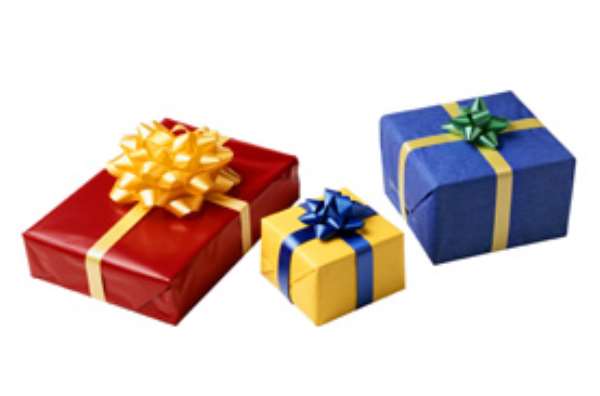 Chairman John Rawlings (JJR) and Professor John Atta Mills, the NDC Presidential candidate for 2004, are reported to have refused Christmas gifts from the Protocol arm of the government. This refusal has generated much controversy, which, in my opinion, has focused on the wrong issue: that is whether it was appropriate for JJR and Mills to refuse these gifts. Whether to accept or reject a gift is the prerogative of the intended receiver. It will seem reasonable to accept such gifts, if for no reason other than celebrating the yuletide. But public policy and debate must not concern themselves with such an intensely private decision. On the hand, public discourse must focus on the following 5 questions that are raised by the episode: 1) What was the value of the gifts to each of these men? 2) What criteria were used to select these men, and others, who made this special gift list? 3) What was the total budget for these gifts? 4) What are the origins of this government-turned “Father Christmas” culture? 5) Is this culture obsolete and should it be jettisoned? With respect to (1), let me express my utter shock and disappointment when I learnt that protocol officers were actually being paid to drive around to distribute gifts to chairman JJR and the Poodle. Have these protocol people run out of important work to do? The news reports keep referring to gifts but we are yet to be told what the gifts were and how much it cost the state. This is very vital information! With respect to (2), I will like to know who else were given such gifts. Are members of the Judiciary included in the list? What determines who gets gifts from government? My little mind keeps imagining a lengthy list comprising of MPs, Judges, Ministers, Chiefs, Members of Council of State, the National Security Team, the Forces Commander, Friends, Relatives, Hangars-on, etc. It is important know the criteria by which the list is determined as such gift giving can easily and unconsciously cross the line and lead to bribery and corruption. As we know, gift giving in Ghana has been used as a cover-up for all kinds of shenanigans and it is incumbent that the government does not promote this culture. The government must, as a matter of urgency, furnish the nation with the criteria for selecting recipients and a list of recipients. 3) Given our financial situation, we must live by the motto of "every pesewa counts." A few million cedis here and there for gifts to him and her and before you know billions have been spent that could be used for more pressing purposes, such as roofing schools in Birim North. 4) What are the origins of this culture in which government plays the role of Father Christmas and distributes goods to Ghanaians who have been good during the year. I aver that the culture is rooted in the "divide and rule" days of the colonialist when loyal civil servants and chiefs were given Christmas boxes to reward them for a loyal year and to entice others to behave in the coming season. 5) I aver that the culture referred to in (4) is obsolete in modern Ghana and puts the state in a difficult position of choosing among its many citizens using criteria that is subjective and that can be used as political payback. In the light of this concern, it is submitted that this practice should be discontinued forthwith. Positive change must be all embracing! So that some of you may not think I am the grouchy grinch who wants to steal Christmas from the government, let me submit that I will not object to the government sending Christmas cards to various people to share the season goodwill. However, any such cards must be mailed and not delivered by emissaries, who must be put to work or fired if they have nothing better to do with their time. In conclusion, government must understand that these are difficult and changed times and archaic protocol must be abandoned to reflect the times.